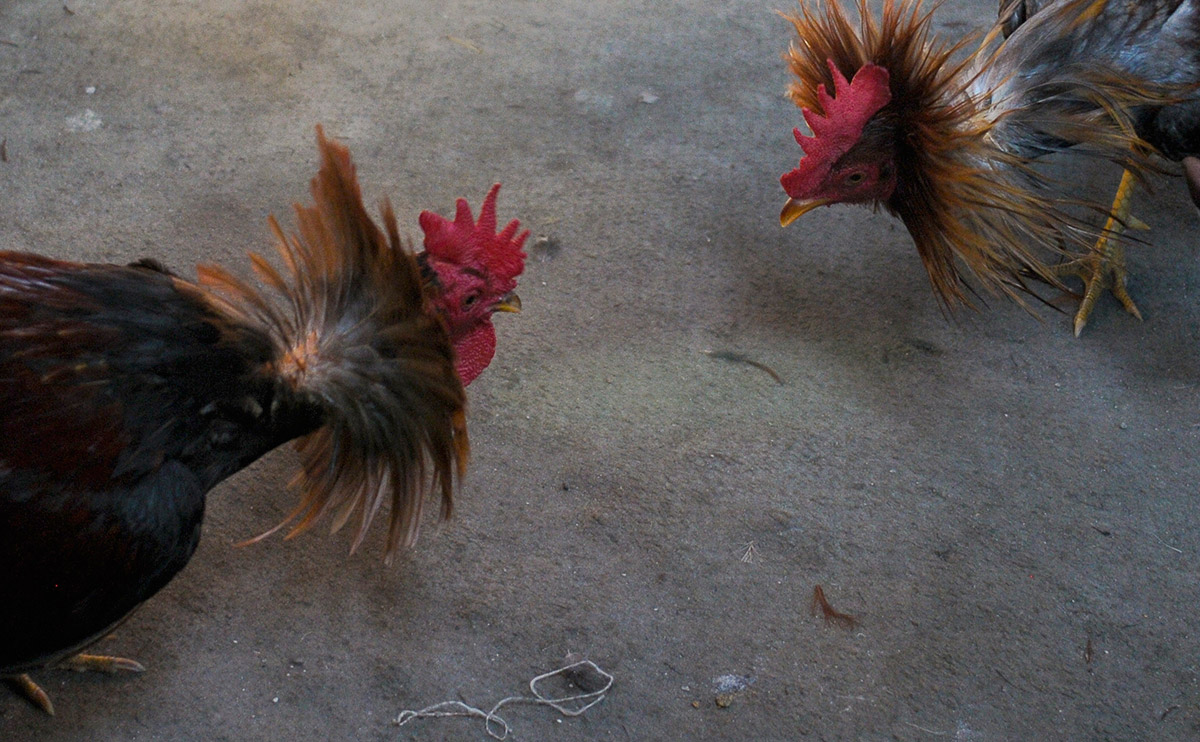 It’s part of a renewed effort to crackdown on this illegal, barbaric practice … because let’s face it: We can’t always rely on roosters to exact their own vengeance (even Foghorn Leghorn).

We have no problem with that part of the legislation …

As we’ve said repeatedly, this website “rejects the inhumane treatment of animals – be it dogfighting, bear-baying or cockfighting.  Such activities are disgusting, and we have zero tolerance for individuals who engage in them.”

But what about the proposed legislation’s attempt to criminalize the behavior of those who are, in its own words, “present at any structure, facility, or location where preparations are being made for the purpose of cockfighting with knowledge that those preparations are being made or with knowledge that cockfighting is taking place or is about to take place?”

Does such language – and the fines and punishments the legislation would assign to such behavior – cast too wide a net?

Don’t get us wrong: There ought to be severe punishments imposed on those who participate in cockfights, wager on their outcome or pay to attend them.  This is especially true in South Carolina, which saw its state agriculture commissioner indicted on cockfighting charges in 2004.

But can we really go all “pre-crime” on individuals who happen to be present in the vicinity of such events?  Especially in such broad terms as this bill proposes?

Shealy and Hembree’s bill represents a good start on a very worthwhile issue.  In fact we wouldn’t mind it if some of the fines and punishments were made even steeper.  Hopefully future versions of this legislation will do that … while modifying the worrisome “pre-crime” language.

What do you think?  Share your thoughts in our comments section below …

Cock fighting is inevitable. 3 and half minutes but pretty funny.

..the cocks come home to roost.

Now the flaming RINOs want to insult your intelligence with a cock fighting bill but that Tea Train’s rolling to a barbeque and THEY will be the goat !!!

Just glad that flag is down.

On a warm day Flip’s IQ gets up to 90 and he chases his shadow around
But he STILL thinks President Trump will “give” him Section 8 and that the flag is…”down” !!!

Confederate flag lovers told us after the flag is down the minorities will still be bitching,

Yet the only fools still running their mouths are the ones with their red necks itching.

Now if only racists like Lone Ranger would kindly leave the state!

Flip said it would be a wonderful day if HONEST and WORKING voters would leave
But then there’d be no one to pay Flip’s Section 8–the homeless freeloader would grieve !!!

How much you wanna bet this Lone Ranger shitstain is getting a check from the government every week? He seems to be very well versed in the various programs and their names.

robert e.–NO relation to Lee–flunked in school and of course then he quit
Now his claim to fame is Section 8 and SNAP and knowing how to say… !!!

Wow. You really are versed in all the welfare programs. You know, those poor ass losers who get welfare are overwhelmingly white, southern and from former confederate states. Just like you, cracker.

robert e.–NO relation to Lee–was a Dimwit grifter and slacker
His vocabulary is limited to…SNAP–Section 8–and “cracker !!! “

Lone Ranger wouldn’t know a real job if it walked up and kicked him in the butt,

But that won’t stop him from staying in his confederate flag loving rut.

flip shot off his lip and missed his eighth grade graduation but his reason was a beauty
The freeloader got held up again down at the Section 8 office and…he had jury duty !!!

Of a guy who likes racist flags and has no respect.

Maybe if he had a coherent, logical though once in a blue moon,

When the eighth grade dropouts had a reunion Flip was wrong but always in the know
After all–it was he who dropped out of Remedial English writing for “logical thoughts”…”logical though !!! “

Lone Ranger has all day to come up with his terrible rhymes,

But he stops every now and then to beg for nickels and dimes.

Good, now amend it to include dog fighting and make it a felony on the first offense.

Yet they have no problem with slaughtering 1000s of them a day in the processing plants. That’s fine. Those chickens are tasty.
Fucking hypocrites

All the problems the state of SC has, yet their priority is chicken fighting bills….

Was just thinking the same thing. Jeez…. y’all get some real work done down there.

Obviously FITS ain’t been to Cockfighting Club in San Juan Puerto Rico..(right across from ESJ Towers where we were billeted while on rotation…).

Those dudes have it down to an engineering science. It sure as hell ain’ta bunch of white-trash rednecks riling up some roosters in a barn either. I ain’t talking “two’s and fews” here…., rolls of 50 & 100 dollar bills are openly flashed and not a damn bit of trouble!!!
It’s legit as hell and above board….cocktails & beer served by “ringside girls” even chicken pie (you eat the “losers”!!!)

Went to it a few times when I was on a rotation flying out of Puerto Rico all over South America. One thing fer sure…….that’s the only place where a Gamecock is sure to win!!!…LOL!!!

Of course FITS wouldn’t know anything about that kind of world…………..

In solidarity with the suffering of these noble animals, I vote that USC change their mascot to the “grumpy penises.” Most of the T-shirts your daughters wear will still apply.

I’m glad to see our illustrious legislators found the time in their busy schedules to tackle the moral and social plague of cockfighting. Now that it’s being taken care of — maybe there’ll be time for infrastructure repairs, ethics legislation, education reform and economic development — all of which took a back-seat to cockfighting.

That should really help with the current prison overcrowding problem.