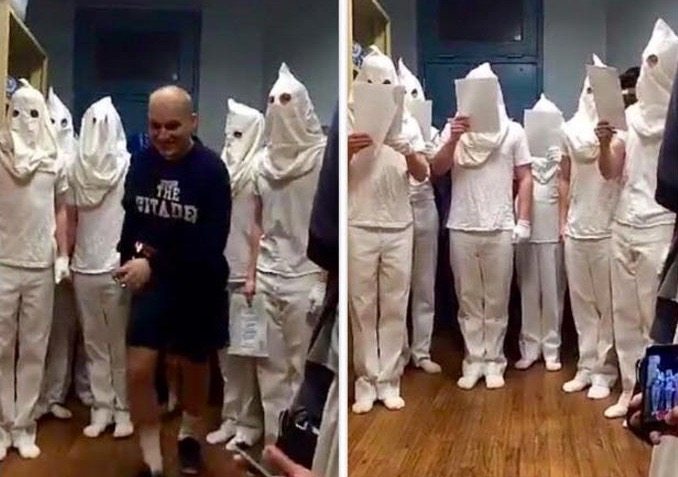 A government-funded military college in South Carolina is staring down a major scandal after several of its students – well, cadets – were photographed wearing white hoods reminiscent of those once donned by the Ku Klux Klan.

The scandal went down at The Citadel, a state-supported college that happens to be a popular spot for “Republican” presidential candidates who want to appear tough on foreign policy as they court early-voting South Carolinians.

School leaders say they have already launched an investigation into the incident – and identified those responsible.  Suspensions have already been doled out to at least seven students.  School officials are also providing some context for the images – saying they were taken during a skit inside one of the school’s barracks in which the “Ghosts of Christmas Past” were being celebrated.

“A social media posting, which I find offensive and disturbing, was brought to my attention this morning. It shows an upper class cadet in front of seven cadets with pillowcases over their heads,” lieutenant general John W. Rosa, president of The Citadel said in a statement. “In accordance with college policy, we immediately began suspension proceedings for those cadets known to be involved, and we are continuing to investigate this incident. Preliminary reports are cadets were singing Christmas carols as part of a ‘Ghosts of Christmas Past’ skit. These images are not consistent with our core values of honor, duty and respect.”

The images were reportedly taken from a video clip uploaded to Snapchat, an app that allows for users to send text and picture messages discreetly.  A woman saw the clip on Snapchat and apparently uploaded screen caps from it to her social media page.

The Citadel is located in Charleston, S.C., the site of a white supremacist mass murder in June that left nine blacks – including a State Senator – dead.  The clip comes as KKK membership in the state is said to be surging.