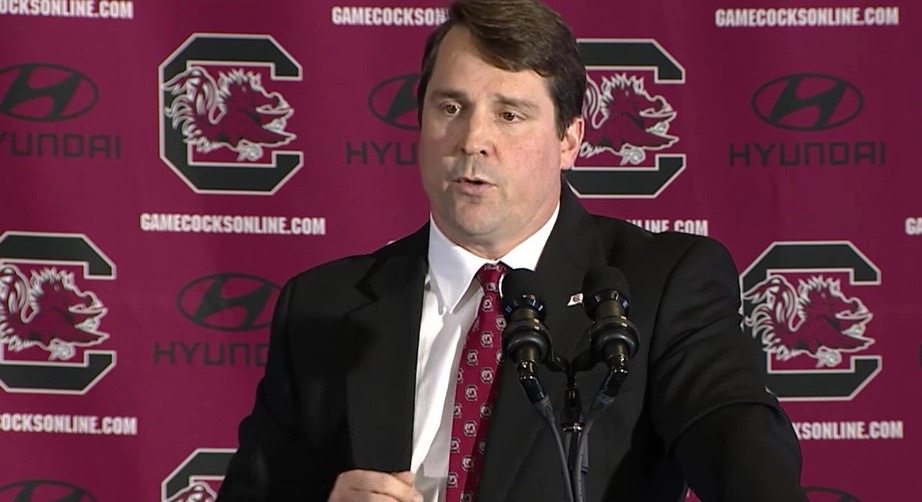 Will Muschamp – the University of South Carolina’s new head football coach – is wasting little time in assembling his staff.

A day after he was introduced as the Gamecocks 34th head coach, the former Florida front man named Travaris Robinson as his defensive coordinator/ defensive backs coach and Bobby Bentley as his running backs coach.

Robinson, widely regarded as one of the nation’s top recruiters, coached defensive backs at Florida from 2011-14 and at Auburn this season.  The former Auburn defensive back spent three years in the NFL prior to becoming a graduate assistant under Muschamp during the latter’s first stint on the Plains from 2006-07.

“I look forward to Travaris leading our defense,” Muschamp said. “I’ve worked with him since 2006. He understands our schemes and systems and what we want to accomplish on defense.”

South Carolina has struggled on defense since Jadeveon Clowney turned pro prior to the 2014 season.  The Gamecocks gave up 27.5 points per game in 2015, ranking No. 72 out of 127 Division I-A (a.k.a. FBS) teams.  Total defense was even worse, with the 429.8 yards surrendered per game equating to the No. 96 national ranking.

Bentley – former head coach of the Byrnes (S.C.) High School Rebels – hopes to improve an anemic rushing game that averaged only 154.7 yards per game (85th in the country).

“We look forward to having Bobby back in the state of South Carolina,” said Muschamp. “He is a legendary high school coach in South Carolina who won multiple state titles. He will represent our University in a first-class manner.”

Bentley spent the past two seasons as an offensive advisor to Auburn head coach Gus Malzahn.  Worth noting?  His son Jake Bentley is one of the nation’s most sought-after high school quarterbacks, a 6-foot-4, 217-pound pro-style quarterback who is now likely to give the Gamecock program strong consideration.

Muschamp is expected to hire former Florida offensive coordinator Kurt Roper to the same position in Columbia, S.C. – although that move was not announced this week.  Roper ran David Cutcliffe‘s offense at Duke prior to joining Muschamp during his final year at Florida.  Roper also led the Ole Miss offense during the Eli Manning era.

First we had “The Old Ball Coach”, now we have and I name thee “Coach Cock-a-Boom”…Yes, you heard it here first!

Will Muschamp staffs up? I don’t care how you phrase it, you’re going to have some limp seasons.

Bobby Bentley may be a good coach, but he’s burned every high school bridge in SC. Good luck sending him out to recruit.

You beat me to it. To say that high school coaches in this state hate BB is an understatement.

yea he sure has… Your name and brain function are on par.

Will is bad news for the Cocks. He will not be around for more than two seasons. This guy has some serious mental issues. Observe the obtuse facial expressions he gives to players that have displeased him. Totally childish behavior. Utterly psychotic. Freud, please.

He fits right in with Frank Martin.

Who is currently the coach of the only undefeated team in the country and has the Gamecocks off to their best start in quarter of a century.

Just don’t piss him off.

I don’t know that you want to piss any coach off these days (see Dabo and the punter this past weekend), but the bottom line is that winning covers a multitude of sins. Not that I’m saying Muschamp will win (because I don’t support his hire), but the anger management issues are usually a side effect of losing.

Hey Daniel get back out in the wilderness and skin a pole cat. Dam…. Daniel Boone king of the wild frontier trying to sound off on football. Go put on your buckskin suit.

Lots of people in power at USC like that….yawn.

What’s the reason for this celebration?
Man, look at all those people there
Hanging round this station

An essential train is coming
On track number one
Bringing an important person, son

Well tell me who’s about to arrive?
There he is now, Muschamp giving the High Five

Oh, look at them shuffling, shuffling down
A-rambling, scrambling over the town
Hustling, bustling, buzzing around
Never saw a bigger celebration

Oh, that’s the best parade I ever been on, man

Natch! You are in Gamecock Town!
While we amble along

The proof of the pudding is in the eating. You fill in the laugh-line.

LMAO @ the Roper hire. Beautiful. And, every high school coach in the state hates Bobby Bentley. Great time to be a Tiger.

because Willie Corn Hole did not pan out…I love when folks who don’t have a clue try and speak something for fact. STFU U DAB.

What does Willy Korn have to do with BB’s relationship with high school coaches? I don’t care whether you believe me or not. Trust me, he is not very well liked in this state.

He’s not well liked because he beat the crap out of them for the most part. Other than that, there has never been any personal beef between him and other coaches. It’s mostly water under the bridge because it had to do with the accusation that he ran up scores. As for Roper, I would say Duke’s offense looked pretty damn good with him at the helm and they haven’t been the same since.

That’s not the whole story, Daniel. The crap he pulled to get back in at Byrnes by pushing out Miller did not sit well with anybody in coaching circles. Especially when he left one year later for Auburn.

I remember hearing rumors and rumblings about that saga, but I’m unsure of all the details. I believe that Miller went to and is still at Spartanburg as head coach and it was confirmed yesterday that Bentley was there to meet with Miller and Tavien Feaster. So, if there was a big beef between the two, it appears to either have been nothing or settled. Otherwise, I don’t know why he would make his first recruiting stop there.

Because he’s an arrogant SOB and more than likely trying to smooth things over. Would’ve loved to have been a fly on the wall…

Bentley basically convinced the Spartanburg School District to create a position for himself to return to Byrnes. He named himself OC and ran Miller off. Then he up & left a year later. I have a brother and a nephew in the SC high school coaching ranks (one in the upstate & one in the midlands). BB is not a popular guy.

Interesting post below I saw on GamecockCentral about Bentley. Confirms some of what you’re saying and confirms how much of a soap opera HS football sometimes is in this state.

“I happen to know Coach Miller and while I would not say he hated Bentley, to say he DIDN’T leave Byrnes because of the Bentley influence would be totally incorrect. No matter what Miller did at Byrnes (4 State Championships equaling Bentley) he was always in the shadow of Bentley. Some even refused to credit Miller, always saying he was a good coach but Bentley built this. Bentley’s return to Byrnes did cause issues. Chris Miller is a great guy and not one who would hold anything against anyone but he did feel under-appreciated at Byrnes. There was another reason other than Feaster that SHS was Bentley’s first stop. And as I understand it Bentley has changed as far as all that cocky BS. For a guy that once bragged that his QB Camps were equal to the Manning Academy, changing that attitude is huge and will go along ways to clearing the air with a lot of the SC HS coaches that knew him before…….he is a Gamecock now and yes just like Spurrier, I welcome him and will support his efforts at USC. But he’s just one position coach not God.

Last thing I want to say about Bentley, I was shocked he was hired. In talking to a few SC HS coaches I know they all said the same thing. He was a very good coach, built his program from scratch and got to a place he won big. His arrogance is legendary but as one coach said ‘name me any young HS coach that wins like him that isn’t arrogant’. Experience and age have a way of toning all that stuff down over time. But to a man these coaches stated that Bentley was taught a very valuable lesson about burning bridges when he was promised year after year a position on the Tiger staff. Some of his cockness came from believing he’d make the jump from HS to major College….say what you will but to many HS coaches that’s the dream. I have a nephew who coaches in SC and everything he does is with an eye on landing a college position coaches job. Taking the PC job then quiting after one season burnt some bridges as well but he seems to have changed. So for that I will give the man a pass……he’s one of us now and I certainly hope he uses this opportunity to prove he was a great hire……ummmmm sounds like what his boss is now trying to do.”

It is a soap opera. And, it is a very small world. Everybody knows everybody & everybody’s business. Maybe BB can eat a little crow and get back in the good graces of these guys. Time will tell.

Byrnes HS, Presbyterian College, Auburn. The Bobby Bentley march to Columbia. This should end similar to the one Sherman made.

Coach Physo will never make it 4 years. He’ll explode before to long and that will be it. I hear MUSC has anger management class going on two for 1 deal. He and Martin can car pool….