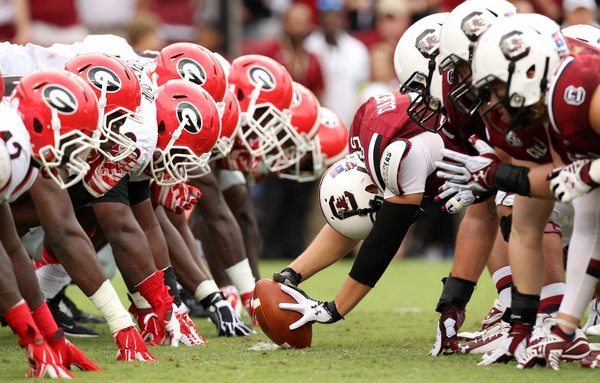 EX-GEORGIA COACH WILL LAND SOMEPLACE … WHY NOT COLUMBIA?

But could one of those implications be Richt taking the vacant Gamecock head coaching job?

Probably not … but the pros and cons of such a hypothetical are worth entertaining.  So let’s entertain them …

CON … Animosity.  South Carolina fans have spent the last decade-and-a-half learning to loathe Richt.  A lot of that contempt would be released in the event he were to don the garnet and black, but the first reaction of most Gamecock fans to his name being floated as a prospect would universally be negative.

PRO … Recruiting.  Georgia has boasted numerous Top Ten and Top Five national recruiting classes under Richt – including the class currently committed to come to Athens (No. 7 nationally).  Plus he has recruited most of his talent in Georgia, a place where South Carolina must reestablish inroads if it wishes to return to competitiveness in the SEC East.

CON … Timing.  Gamecock athletics director Ray Tanner has said he wants to name his new head coach in early December.  Obviously Richt will be coaching the Bulldogs through January 1 – which presents a major logistical problem.

CON … Ceiling.  Richt never won a national championship, and he hasn’t won an SEC title in a decade.  Spoiled by two conference championships during his first five years in Athens, Georgia fans simply got tired of waiting for Richt to duplicate that success.

PRO … Integrity.  Richt’s humble pie, “Jesus He Knows Me” shtick can be insufferable at times, but there’s something to be said for the fact he runs a clean program and has stayed out of trouble with the NCAA.  Oh, while winning lots and lots of games.

CON … Management.  Georgia’s press release announcing its parting of ways with Richt left the door wide open for him to take another position with the school’s athletic department.  Obviously Georgia has a tradition of hiring successful head coaches to lead its athletic department, and with current AD Greg McGarity‘s contract expiring in 2017, the Bulldogs could be grooming Richt as their next AD.

Mark Richt Out At Georgia