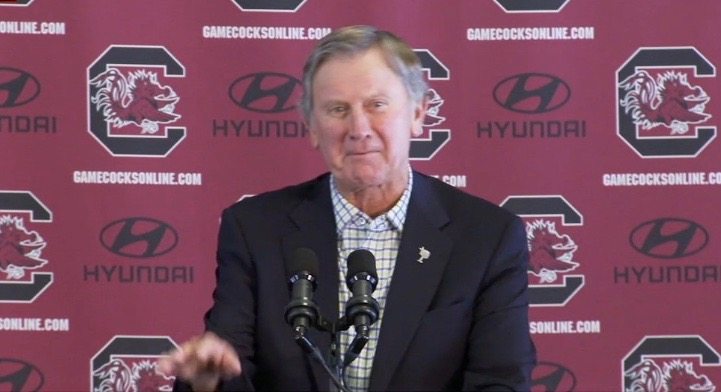 “SOMEHOW OR ANOTHER WE’VE SLID … AND IT’S MY FAULT”

So yeah … this happened.

As reported Monday evening, University of South Carolina head football coach Steve Spurrier stepped down after ten-and-a-half seasons at the helm of the Gamecock program.

The Head Ball Coach leaves the game with a 86-49 record at South Carolina – the best in school history – and an overall 228-89-2 mark in twenty-five seasons at the college level.

“First of all, I’m resigning and not retiring – get that part straight,” Spurrier said. “I doubt if I’ll ever be a head coach again – but you know, maybe coaching a high school team or something – so don’t say I’ve retired completely from coaching. Who knows what will come in the future.

“It was only two years ago we were fourth in the nation and the last of those 11-2’s,” Spurrier added, referring to the 2013 season in which South Carolina won its third straight New Year’s Day bowl game and finished with an 11-2 record for the third consecutive season.

Prior to Spurrier’s arrival in Columbia, S.C. in November 2004, the Gamecocks had won ten games just once in more than a century of football – and had never finished in the Top Ten.

“Somehow or another we’ve slid, and it’s my fault, I’m responsible – I’m the head coach,” Spurrier said.  “And it’s time for me to sort of get out of the way and let somebody else have a go at it.”

That someone?  For the time being it will be offensive line coach Shawn Elliott, who will serve as the interim coach for the rest of the season pending a nationwide search for a new head coach.  Elliott was tapped for the interim job despite early reports from The (Columbia, S.C.) State newspaper indicating it would be going to quarterbacks coach G.A. Mangus.

Spurrier preemptively addressed why he was stepping down in the middle of the season rather than waiting until the end of the year.

“I find that that doesn’t work a lot,” Spurrier said, saying that it would deprive the team of the “accountability” it needed.

Spurrier was praised by his former athletics director, Eric Hyman – who is currently in the same position at Texas A&M.

“He is unequivocally the best team player a coach can be in an athletic department,” Hyman said.  “Folks think of iconic coaches as demanding and prima donnas, but he was none of that. He was so supportive of all the sports at Carolina.  The media has well reported on  what he has done as a coach, all the successes and achievements and records broken, but little has been reported on how unselfish he was and how he saw himself as a part of the athletics department.”