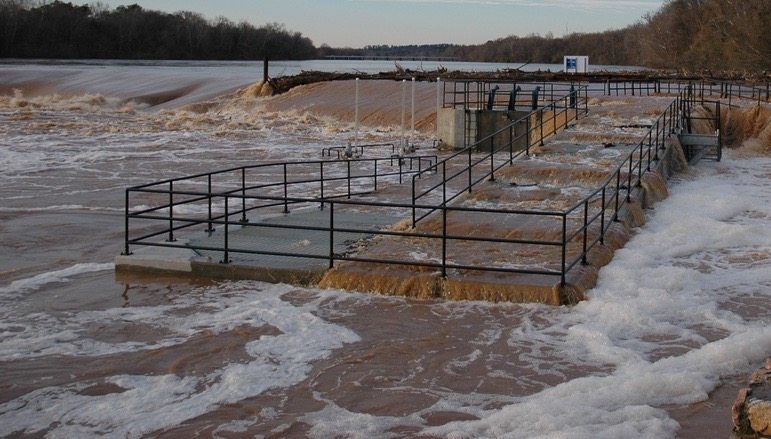 In case you hadn’t noticed, there’s a major problem with the City of Columbia, S.C.’s dilapidated water system.

Specifically, we’re referring to the breach of the Columbia Canal dam that occurred during “Floodmaggedon,” the record deluge and accompanying storm surge that dumped trillions of gallons of water on the Palmetto State this week.

For this website’s latest report on the city’s colossal (and ongoing) pooch screw related to this dam breach, click here.

Why does the Columbia Canal matter?  Because it’s the primary water source for hundreds of thousands of Midlands, S.C. residents – most of whom remain under a boil water advisory nearly a week after the storm.

Meanwhile virtually ever government agency in the state capital has been shut down in an effort to minimize the city’s water usage.  Additionally the University of South Carolina closed for the week to help lessen the load – and even moved its football game scheduled for this weekend halfway across the country.  Taking no chances, local hospitals are already preparing for emergency evacuations in the event the water issue is not resolved.

It’s serious, in other words … even though city government (and the local mainstream media) have gone out of their way to minimize the negative publicity.

According to our sources, the problem has now become even further complicated due to a lack of coordination between governments.

Specifically, we’re told National Guardsmen are almost done erecting a coffer dam upstream of the breached canal – hoping to cut off the water flow and contain the canal’s headwaters.  This is different than the boulder dam the city attempted to build further downstream.

Why?  They’re hoping to quickly assess and complete the repair job the City of Columbia has failed to do over the last five days.

The only problem?  Once this dam is in place, the city’s water supply will be effectively cut off – which is why the city has been desperately scrambling to position emergency pumps in the Broad River, enabling it to draw directly from the river.

Not surprisingly, the Corps is expected to finish its dam well in advance of the city positioning all of its emergency pumps – meaning the city’s water problems are about to get worse.

“Columbia – we have a problem,” one veteran engineer told FITS.

Where’s the rest coming from?  A city reservoir – one that we’re told has dropped seven feet in the last 24 hours.

Assuming these immediate issues can be successfully navigated, long-term problems persist.  As we noted in our last report, several key questions linger.  Among them: What level of reduced capacity are city officials envisioning moving forward?  For how long is the system going to be operating below full output? And how does this reduced capacity impact a city struggling to get back on its feet?

Those answers are nowhere to be found …

Look, we’re not trying to be alarmists – we’re simply reporting what we’ve been told by reliable sources in an effort to inform the public of what’s really happening while holding government(s) accountable for their actions.

Hopefully everything gets sorted out, but it’s clear the Columbia water situation remains far less certain than city leaders are willing to admit.

UPDATE: As of 3:30 p.m. EDT, as this article was going to press, sources tell FITS construction on the dam has been suspended in order to give the city more time to get its pumps in place.  Guardsmen were reportedly told to “stand down” from their posts.  Yeah … what a mess.