|| By FITSNEWS || Earlier this week we reported on a national food stamp scam – the mass refusal of states to enforce work requirements on able-bodied, childless adults.

This refusal keeps people hooked on the government benefits … keeping the program’s enrollment and costs at artificially high levels.

Not surprisingly, South Carolina – led by so-called “conservative” governor Nikki Haley – is one of the forty states in America which refuses to enforce this work requirement.  Take a look at this map courtesy of a new report from the Foundation for Government Accountability (FGA) … 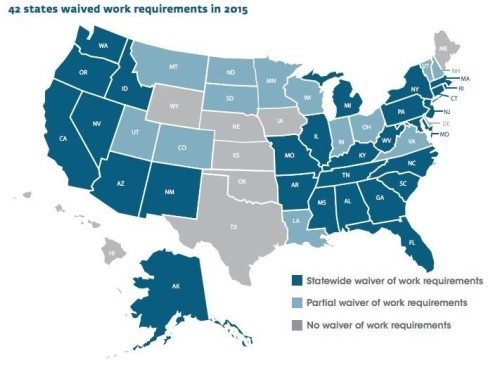 Of interest?  The rampant expansion of these waivers under U.S. president Barack Obama.

This year the Obama administration offered statewide waivers to thirty-six states – and twenty-nine of them (including South Carolina) accepted.

According to average monthly participation data published by the U.S. Department of Agriculture (USDA), a whopping 875,866 South Carolinians were part of the Supplemental Nutrition Assistance Program (SNAP) in 2013 – a 27.3 percent increase from 2009.  Meanwhile benefits awarded through the program climbed from $1 billion to $1.38 billion over the same period – a 37.9 percent increase.

The good news?  Program enrollment in South Carolina declined by an estimated 40,000 individuals in 2014 – with the total annual cost of the program dropping to $1.23 billion.

Assuming you trust the government’s data …

But still … that’s nearly 20 percent of the state’s population receiving food stamps, one of the highest rates in America.

State lawmakers moved this expense off of the state’s books last year – meaning they no longer count this $1.23 billion as part of the annual budget.

That’s not the only sleight of hand this website has uncovered.  Three years ago, we broke open a major food stamp scandal at the S.C. Department of Social Services (SCDSS) – the agency which administers the food stamp program for the U.S. Department of Agriculture.  In fact it was not long after we revealed cooked books at the agency relating to food stamp error rates and other data that we’re told Haley and state lawmakers began their push to remove the program from the state budget.

Far too many South Carolinians remain on food stamps – and Palmetto State leaders aren’t taking the necessary steps to get them off of the federal dole.  While other “Republican” state leaders – like Kansas governor Sam Brownback and New Mexico governor Susana Martinez – are pushing their states to restore the work requirements for able-bodied, childless food stamp recipients, South Carolina continues to reward those unwilling to work with benefits.

What Is Nikki Haley’s “Equality Agenda” For Blacks?