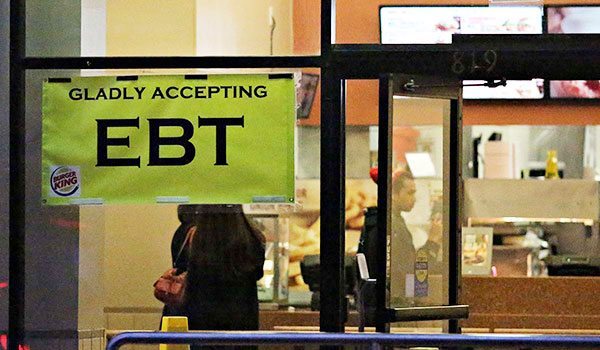 || By FITSNEWS || We’ve long maintained much of life’s wisdom can be found in the lyrics of Coolio’s 1994 hit “Fantastic Voyage.”

Damn straight … except in America.  Here, government dependency is the name of the game – with millions of able-bodied Americans remaining on food stamps (and other government benefits) because sitting around and doing nothing is easier than getting a job.

Oh, and God forbid elected officials pretend to make even totally inconsequential cuts to the program – which deprived taxpayers of an estimated $74 billion last year.  Why not?  Because doing so might make people earn something for a change (instead of sitting back and watching it be handed to them) … and we can’t allow that sort of individual responsibility to take root in the United States, can we?

Anyway, according to the Foundation for Government Accountability (FGA), the federal government’s food stamp program “is now one of the fastest-growing welfare entitlements in our federal budget, and one of the largest.”

That’s true.  Although food stamp costs declined modestly from 2013 to 2014, enrollment and annual costs have yet to come down from the 2007-13 surge – which saw the number of dependents nearly double and the costs of the program nearly quadruple. 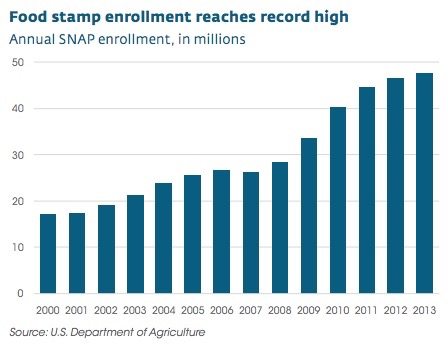 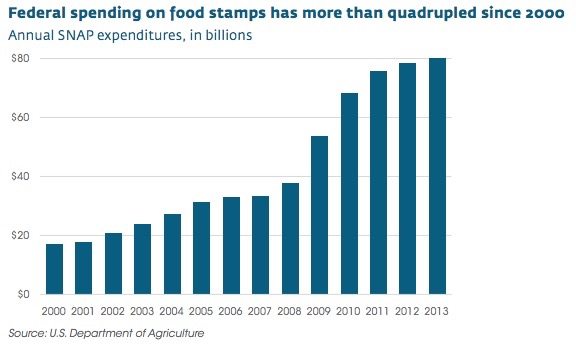 Why is America’s food stamp population remaining at such an unsustainably high rate?  Because U.S. president Barack Obama – and “Republican” leaders in state governments across the country – refuse to enforce any semblance of accountability over the program.

“One key cause of this out-of-control spending is the recent explosion in enrollment among able-bodied childless adults,” a new report from the FGA noted.  “Although federal law requires these adults to work in order to receive food stamps, the Obama administration has awarded an unprecedented number of waivers to states, allowing able-bodied childless adults to receive taxpayer-funded food stamp benefits without working at all.”

How many states?  According to the FGA report, forty states have full waivers – exempting all able-bodied childless adults from having to work for their food stamps.  Another six states have partial waivers.

“In 2013, just one-quarter of childless adult households receiving food stamps had any earned income,” the report concluded.  “The remaining three-quarters had no earned income, meaning they were not working at all.”

In an oped for The Washington Times, governors Sam Brownback of Kansas and Susana Martinez of New Mexico championed the restoration of work requirements for certain food stamp recipients.

“Restoring work requirements for food assistance has the potential to transform millions of lives by returning our welfare system to the hand-up it was designed to be,” Brownback and Martinez wrote.  “Work requirements benefit all of us by protecting our limited resources for the truly needy, propelling those in need toward work and a better, healthier life and giving them the hope of a brighter future. Getting more people to work is key to growing our state economies.”

And remember, this isn’t a blanket change to the program – this is simply insisting that able-bodied adults without children work for their benefits.

Letter: The Hypocrisy Of Those Attacking Donald Trump

“Work requirements” sounds like a great idea, don’t have the slighest idea how something like that could be implemented efficiently

What you describe in your second paragraph means that the BUSINESS OWNER is perpetrating fraud that needs to be reported to the USDA.
You might still be able to call your local food stamp office or fraud hotline and report to them. But, given the general incompetence shown in the management of SCDSS by the last 2 Republican governors, who the hell knows?
For example, when Mark Sanford was governor, his agency head changed a rule to make the error rate look better which allowed changes in income and household size to no longer be required to be reported within 10 days, but could wait 6 months until the next certification period – that meant that the person left in the household could get hundreds of dollars in excess benefits per month unless the people who moved out applied for food stamps themselves.
I had personal knowledge of that as a CPS worker. The food stamp worker I reported the change in household size to was absolutely disgusted that she could not make the change and the white crack head I was reporting could continue getting benefits for people no longer living in her home.

This is why people argue against states being given control of federally funded programs. The federal government has its problems but the states usually muck things up to an even further degree in a lot of cases.

When your not eating, work is a great idea.

I’d hate to have to manage a crew of those folks.

WHY DOES ‘WRITTEN BY FITS’ LIE AND DISSEMBLE AND MISLEAD THE WAY THAT HE/SHE DOES, PARTICULARLY WHEN FACTS ARE SO EASY TO FIND?

The Personal Responsibility and Work Opportunity Reconciliation Act of 1996 (PRWORA) limits the receipt of SNAP benefits to 3 months in a 3-year period for able-bodied adults without dependents (ABAWDs) who are not working, participating in, and complying with the requirements of a work program for 20 hours or more each week, or a workfare program. Individuals are exempt from this provision if they are:

Responsible for the care of a child or incapacitated household member,

Medically certified as physically or mentally unfit for employment, pregnant, or

States may request a waiver of this provision for people in areas with an unemployment rate above 10 percent or for those in an area with insufficient jobs. States also have authority to exempt individuals using the 15% exemption authorized by the Balanced Budget Act.

SNAP regulations provide a number of ways States can demonstrate that an unemployment rate above 10 percent or a lack of sufficient jobs. States can provide evidence of any of the following to qualify for a waiver:

A recent 12-month unemployment rate above 10%

A recent 3-month unemployment rate above 10%

Designated as Labor Surplus Area (LSA) by the Department of Labor

A 24-month average unemployment rate 20% above the national average

A low and declining employment to population ratio

A lack of jobs in declining occupations or industries

Cut off benefits for illegals and deport them.
Adults that don’t work (unless a proven disability or of on high end of SS age 70),don’t eat. A child should NEVER go hungry IF they make it thru the Democrat Party abortion mills.

Sounds good, but the reality is that in many instances mental illness is the chief problem. Visit a homeless shelter one evening and that will become evident.

I agree with you. Volunteered much at a homeless shelter. Addictions and mental illness have robbed them of any hope or chance of a life.
My prayer is those people don’t fall thru the ‘cracks’. Churches and non-profits do all they can do however resource are tight.

I NEVER turn down someone on the street for money.I hope they use it to eat or to hydrate.However who am I to judge what they spend it on? If a beer gives em piece of mind for an hour I don’t have a problem with that.Show em some love and dignity.

Highest spending ever, and still there are people truly starving. That is all that you need to know to see the programs are riddled with fraud and waste. I bet anyone that in a week’s time I could acquire $1000 worth of food for $500, compliments of EBT. Like voting, ID is not necessary and I could shop with a 18 year, different race than mine, girl’s card with no challenge

An EBT card, like a debit card, can be used by anyone who knows the PIN. There is no proof of identity. Ever put gas in your car with a credit or debit card? Who verified your identity?

I’m the one that worked to put money on that card, and the EBT card.

You miss the point, as usual.

I missed the point also.

I trying to get him to go ahead and say it is demeaning to be accountable for the assistance you are getting. Or worse yet, that it is “racist”. He is like the nightmare Brother-in-Law that keeps your sister and nieces in poverty because “I’m white and can’t get help”, borrows $ for food and then buys a $10 scratch-off in front of you. Say something and then your the one being a prick. Food is used as a political tool in this country and that keeps common sense/logic at bay.

The point is, for those of you who are dense, that an EBT card can be used in the same manner as a debit card. No identity is required. Only the knowledge of the PIN. Just like buying gas at self service. Unless you are planning on changing the system (at what expense?), there is not much you can do. What about the situation whereby the EBT card is for a disabled person who can not physically go to the grocery store? Who can use their card and how do you control that?

I don’t know if you possess a credit card, or debit for that matter, but for example I can’t use my card at Domino’s without ID. Some of my cards have my picture on them, What? That is just one example of many places so don’t act like it would be impossible to require. A disabled person is a crutch, NPI, how about a designated caregiver for an ACTUAL disabled person? Face it, there are a million excuses but no good reasons, with you it is about the power gained from being Santa Claus.

I don’t usually frequent high end establishments such as Domino’s, so I am unaware of their policy. The issuer of the card does NOT require that ID be shown. Nothing is impossible given enough time, money and manpower. How much should be expended? I guess you want to save money no matter how much it costs. Caregiver designated by who? Who checks behind the caregiver to ensure they have properly used the disabled person’s benefits? Who checks the checker?

And now it is clear why there are still poor people hungry after all the money spent.

I did not miss your point, I missed his.

We’ve long maintained much of life’s wisdom can be found in the lyrics of Coolio’s 1994 hit “Fantastic Voyage.”

It appears that that the Apostle Paul was also a fan of Coolio.
Thessalonians 3:10
For even when we were with you, this we commanded you: that if any would not work, neither should he eat.

Do you also agree with the communal system also advocated?

Only if if it is voluntary for each individual as in the bible.

I love the EBT card. The other week I was over a Tango’s, and with his EBT card we had great steaks from Wal-Mart, those little pizza’s you put in the oven, and fruit punch and doughnuts for dessert. Man, he really knows how to live.

The names have been changed to protect the not innocent at all
At a local strip club
A young man (of indeterminate color) gets his ebt food allocation. He buys his assortment of hot dogs and polish sausages
Young person brings assorted meat to the strip club. Brings out the grill and cooks the meat he bought gratis of our tax payer dollars.
And this young entrepreneur sells polish sausage and hot dogs to the patrons of said strip club
What happens to said money afterwards I have no clue
Witnessed this first hand
All the other clientele felt there was nothing wrong with this
They felt he was “earning!”
In no way shape or form did any of his customers resent the fact that he was in fact stealing from the tax payers and in fact profiting from it
This guy was an able bodied young man able to work.
Work the system