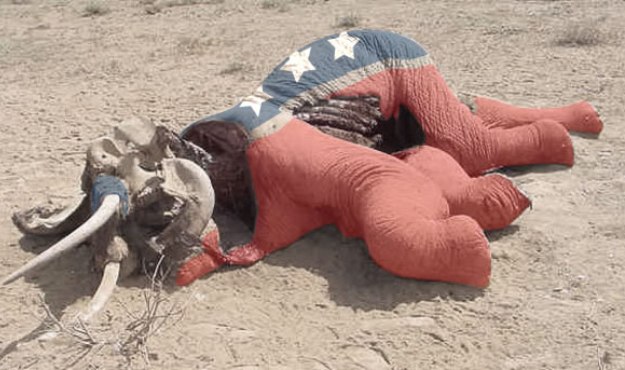 HOW THE GOP IS OFFING ITSELF THIS ELECTION …

|| By COLIN ROSS ||  This is an interesting election cycle for the Republican party because demographically speaking, this may just be the last real shot the GOP has at taking the presidency.  Odd, then, that Republicans seem to be doing everything within their power to lose this election.

What issues are dominating the Republican primary? Immigration, which voters have determined is the 13th most important issue and Planned Parenthood/ abortion – which doesn’t even make the top fifteen. Even though immigration is only the 13th most important issue to voters, the Republicans have already almost lost the entire election based on their rhetoric about the issue.

Just consider that the front runners in the primary are trying to out-do each other on who can be the least humane candidate in modern history.  In one corner you have Donald Trump, whose white papers on immigration have called for an end to habeas corpus and the creation of a massive militarized zone centered around a stupidly expensive (yet useless) wall complete with Soviet-style checkpoints manned by agents who say “papers, please.”  In the other corner we have supposed evangelical Ben Carson who recently advocated drone strikes against immigrants on the border (like that couldn’t possibly have any unforeseen consequences or innocent victims).

These aren’t even your bottom tier candidates, either.  No ladies and gentlemen, these are your Republican front runners.

The problem for the GOP?  These positions may succeed in pushing candidates to the front of the pack in a Republican primary, but is that all that matters?  How will the eventual GOP nominee fare with minorities?  Not well, if history holds.  In 2012 Hispanics voted 71 percent for Barack Obama while Asians supported him at a 73 percent rate and blacks went for Obama at a 93 percent clip.

This should be the year of the Republicans.  There is almost no doubt Democratic frontrunner Hillary Clinton should be in a jail cell right now (in fact, how cool would it be if Jeb Bush and Hilary Clinton shared a jail cell). Even if she doesn’t go to jail, poll after poll shows a large majority of voters think she is completely untrustworthy.  Either way, she is still an establishment candidate reeking of DC insider-dom.

Still the Republicans almost make a compelling argument that she should run the country from a jail cell – presenting them with a childish fascist like Trump as their leading alternative.

The only thing for a sane person to do at this point is grab some popcorn, throw it in the microwave, sit back and watch the GOP carnage unfold like a gladiatorial contest.  After all the Republican party is a freedom-crushing, budget-busting, needless war-supporting relic of a different time in American history so there’s really no point in crying over it.

In fact I am personally cheering Trump on because he is doing more damage to the Republican party in this one campaign than I could ever hope to do in my entire life.