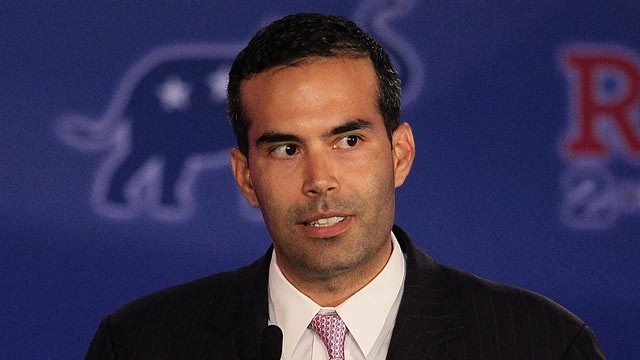 The 39-year-old is the son of Columba Bush – a naturalized U.S. citizen who originally hailed from Mexico.

In addition to filing his dad’s papers with SCGOP officials, the younger Bush will also attend a young professionals breakfast in downtown Columbia, S.C. and a meet and greet with supporters in Lexington, S.C.

A technology investor, George P. Bush has been involved in politics all his life – speaking on behalf of his grandfather at the 1988 GOP convention when he was a mere 12 years old.  He also campaign twice on behalf of his uncle, former U.S. president George W. Bush.

Sheesh….another one to feed at the government trough.

It’s true! I did this and now I own multiple (mobile) HOMES and a billion degrees! And I don’t have to cheat the government for health care because I legally qualify for it! LMAO!!!

But..but… did you also become an ordained preacher?

Just what we need!

Another George Bush at the reigns!

This will end well!

Remember the movie Meet the Fokers – and Gaylord is suspected of having an child out of wedlock with the Puerto Rican maid? Doesn’t this kid look like the one in the movie – Jorge?

What, no meetings at Casa Grande, El Valarte, or Los Aztecs?

How come Columba Bush is a ‘naturalized citizen’ and not an ‘immigrant’ to FitsNews? lol

She is a wetback. She and her kids need to go back to Mexico. They can take Jeb with them.

Jeb was a great governor. Under Jeb average household incomes went up about $20,000 in most groups, (according to their stated income loan applications on the houses they bought with no money down) and then, when the housing bubble burst, and that $20,000 a year increase vanished along with the $49,000 in income the family actually had, he had thoughtfully appointed a number of conservative folks within the state’s Attorney General office, that helped make sure the banks could take people’s homes away quickly and with little fuss. In fact, he was so astute as a Governor he made it possible for giant foreclosure shops to open up in Tampa and Ft. Lauderdale to take peoples homes, stall their abilities to make modifications, and generally save their homes. It took the State Supreme court to order the creation of mediation panels to help slow foreclosures and allow people the chance to save their homes. And he was such a good Governor that outside of real estate related jobs, he grew the Florida economy by about just 1% a year, while encouraging the migration of millions of undocumented aliens to the state, primarily from Central America. Jeb’s a winner, winner, chicken dinner, free college for all, no tax increases and doubling the size of state government.

The rape allegations were against Dubya, not Jeb’s son. They were made by a black lady who later committed “suicide.”

Jeb’s son just broke into his ex-girlfriend’s house and then trashed her yard by driving his car through it.

So not a rapist, just a criminal; like his mother who was caught by Customs Officials, trying to smuggle $25,000 of goods into the country without paying the tariff after a trip to Europe (because the Bushs could not afford the tariff I guess); or his sister who stole a prescription pad from her doctor, so she could forge his name and get illegal prescription drugs.

Well you just have to love those traditional family values. I guess the family that crimes together stays together.

Wrong- many Mexicans are rapists, but I love the Mexican people.

Hasn’t the Bush family sucked enough blood out of our country, yet?

When’s the last time a vampire took a step back and said to his victim, “You know, you taste very good but I’ve had my fill and I’m going to let you go now.”

Only in Anne Rice novels and still yet not that often.

Nah. Someone still has to come in to Rape and Pillage the dead and bayonet the survivors.

In the late 1980’s, George H. W. Bush (“Senior”) was vacationing at the Bush Family compound in Kennebunk Port, Maine. A reporter asked him in an aside after an interview if any of the children playing nearby were his grandchildren. The reporter was bewildered when Bush Senior sighed and said, “Yes, the brown ones”. Seems Poppy never approved of Jeb’s choice in marrying Columba, the daughter of a Mexican illegal. If she had been the daughter of one of the Salinas family’s politicians / drug traffickers, he might have been happier about the match.