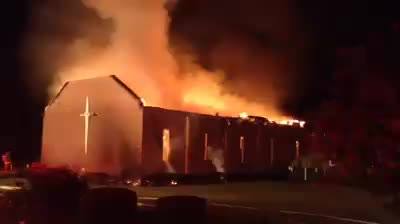 IS THIS REALLY HAPPENING AGAIN?

|| By FITSNEWS || A church that was burned to the ground by the Ku Klux Klan in 1995 went up in flames again this week – the seventh black church in the South to catch fire in the aftermath of a deadly church shooting in Charleston, S.C. last month.

In three of those church fires, arson is suspected.

The Mt. Zion AME Church in Greeleyville, S.C. – located in rural Williamsburg County – was completely destroyed by this week’s blaze.  Law enforcement officials have yet to say whether the conflagration was intentionally set.  In fact some of them suggested that a lightning storm which moved through the area earlier in the evening may have been the culprit.

Still, the timing of the blaze – along with the fact that arson is suspected in several of the other church fires – has many concerned that a 1960s-style wave of violence toward black churches is underway.

There, nine parishioners at Mother Emanuel AME Church – including the church’s pastor S.C. Senator Clementa Pinckney – were gunned down by 21-year-old white supremacist Dylann Storm Roof, who has confessed to the crime and indicated his intention in carrying out was to start a “race war.”

Roof sat with his victims for nearly an hour before slaughtering them – saying he almost didn’t go through with the attack because everyone in the church had “been so nice” to him.

Roof’s use of Confederate flags has prompted a debate over whether South Carolina should continue to fly the controversial banner on the grounds of the S.C. State House – and state lawmakers voted last week to address the issue during an extended summer session of the S.C. General Assembly.

This website has encouraged them to take the flag down … without delay.  (For more on that debate, click here and here).

We condemn all of these acts of violence.

The fight for freedom and free markets knows no color, creed, gender or sexual orientation – and we are profoundly saddened and disappointed to see racial divisions rearing their ugly head again in this country.  And while we must permit the free expression of disturbing – at times disgusting views – acts of violence against person or property cannot be tolerated.

UPDATE: A law enforcement source tells the Associated Press the Greeleyville church fire was “not the work of an arsonist” but added that “further investigation” was needed to confirm this finding.  Let’s hope that report is accurate.