HOW THE S.C. HOUSE COULD “LOSE CONTROL OF DEBATE”

|| By FITSNEWS || Lawmakers in the South Carolina House of Representatives and State Senate voted overwhelmingly to take up the latest Confederate flag controversy during an extended summer session of the S.C. General Assembly.

Their votes – inspired by last week’s horrific, racially motivated church shooting in Charleston, S.C. (which claimed a State Senator, Clementa Pinckney, among its victims) – mean lawmakers can immediately consider a compromise which would likely remove the controversial banner from the north lawn of the S.C. State House.

A version of the flag has flown there since 2000, when a bipartisan, biracial compromise took it down from atop the dome of the state capitol (and from inside the House and Senate chambers).

“Off the dome and in your face,” supporters of the banner said at the time.

The flag was initially raised in 1962 by a Democratic-controlled state legislature in protest of the national civil rights movement.

While most believe there are sufficient votes in both chambers to take down the banner, legislative leaders have yet to determine whether doing so would require a two-thirds majority or a simple majority of members present and voting.

According to the 2000 compromise, a.k.a. the “Heritage Act,” moving the flag from its current location would require a two-thirds majority – or super-majority – of both the House and Senate.  In fact that’s the standard leaders in both chambers tell FITS they are using in considering legislation to take the banner down.

“To amend the Heritage Act takes a two-thirds vote of both chambers,” one GOP leader in the House told FITS.

Senators confirmed the two-thirds standard would be used in debate over any flag legislation in that chamber, too. 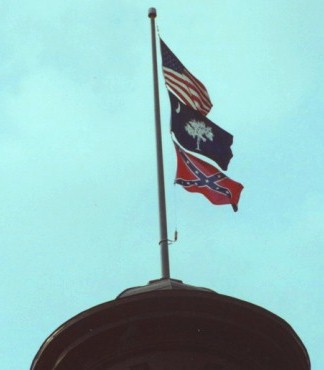 Will that matter?  We’ll see …

In the meantime, flag opponents believe they need only a simple majority to take the banner down – arguing the two-thirds provision in the 2000 compromise is unconstitutional.

While that question looms, leaders in the S.C. House say there is growing concern over especially strident voices on both sides of the debate – voices which could conceivably derail a tentative deal to take the flag down.

“We have the votes right now to move it,” a ranking House member told us.  “But that could change on a dime.”

“Every time we get our noses rubbed in it, we’re going to lose five votes (to take it down),” the lawmaker said.

Meanwhile a Democratic lawmaker who supports removing the flag confirmed to FITS “there is a very real fear that things could unravel.”

“They’re scared of losing control of the debate,” the Democrat told us, referring to GOP leadership.

So … which voices are threatening to undo the debate in the House?

Corley – an attorney practicing in Augusta, Georgia – is an ardent opponent of moving the Confederate flag from the State House grounds.  As such, he was one of ten House members who voted against adding the issue to the legislature’s summer agenda.  Corley has reportedly threatened to sponsor more than five hundred amendments to any resolution removing the flag, and while his procedural roadblocks could be shut down – the animosity such an effort is likely to engender could create problems for the broader debate.

Brannon has already joined with S.C. House minority leader Todd Rutherford in sponsoring legislation to take the flag down come January – assuming a deal to do so isn’t immediately reached.  One of only two GOP lawmakers to urge “Republican” lieutenant governor Henry McMaster to resign his membership in a “whites only” country club in downtown Columbia, S.C., Brannon is an outspoken Michigan trial lawyer who hates the flag and is eager to highlight its status as a symbol of hatred.  He’s obviously got a valid point to make in light of the tragedy in Charleston, but if he overplays his hand he could wind up doing more harm than good to the effort he’s advancing.

We agree 100 percent with Chumley that the “Holy City Massacre” should not be used as a pretext to erode the Second Amendment – as president Barack Obama and 2016 presidential frontrunner Hillary Clinton suggested in the immediate aftermath of the shootings.  But there’s a right way and a wrong way to make that point.  Chumley’s disastrous interview with CNN this week – in which he suggested the victims of the tragedy “waited their turn to be shot” – highlighted the extent to which this staunch flag supporter does not think before he speaks.  And given the volatility of this debate, such thoughtlessness could be incredibly dangerous in the event Chumley decides to address the House prior to its vote on the flag.

We can’t even begin to put ourselves in King’s shoes right now.  He’s a black leader in South Carolina, and if someone were to tell us the current racially charged environment was a time for “reservation,” we’d probably tell them to go f*ck themselves.  Hell, we might even offer an extra “f*ck off” seeing as a black legislator was among the victims of this tragedy.  But as King rises to speak against the flag, his burning desire to appropriate motivations of bigotry and violence to all flag supporters is unlikely to help advance the effort to remove the banner from the State House grounds.  In fact, of the lawmakers mentioned in this post, we’re told King is the one members of both parties are concerned might throw a monkey wrench into their compromise.

Obviously we’ll be keeping a close eye on the forthcoming flag debate in the S.C. House of Representatives.  And our position on what should be done is clear.  In fact lawmakers so far are following the course we prescribed in this column.

Let’s hope they stay the course …

Of course at this point it’s worth noting the House isn’t where flag supporters are expected to make their “last stand.”  That would be the State Senate, where at least two lawmakers are reportedly contemplating a filibuster of any legislation seeking to move the banner.