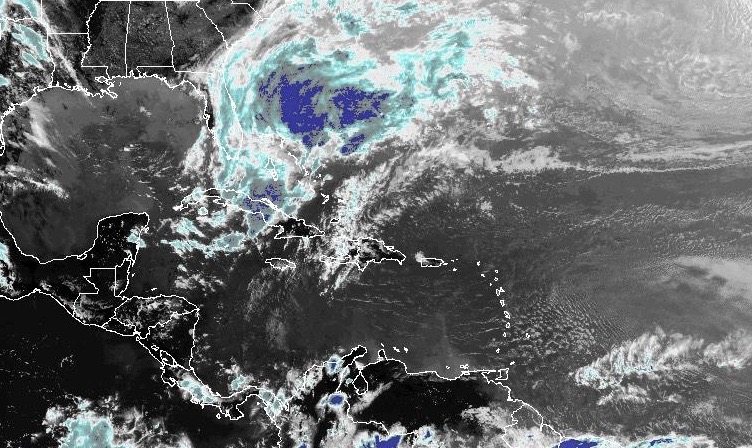 || By FITSNEWS || Hurricane season for the Atlantic Ocean doesn’t officially start until June 1 … but somebody forgot to tell that to an area of low pressure that’s hovering off the Florida coast.

This storm system (above) hasn’t developed tropical characteristics yet, but there’s a good chance that could change …

In fact according to the National Hurricane Center in Miami, Florida, there’s a forty percent chance these storms could develop into a cohesive tropical system over the next two days.  And if that happens, South Carolina is squarely in the “forecast track.”

Naturally, the possibility of a tropical system forming in early May must be due to “global warming,” right?  Because let’s face it … every weather reading/ phenomenon is due to global warming (according to its disciples).  And you’d better damn sure believe in global warming … or else.

But wait … what about Hurricane Alice?  That system formed on December 30, 1954 and reached category one status before dissipating a week later over the Caribbean.

So … was there “global warming” in the fifties, too?

Forecasters Dr. William Gray and Phil Klotzbach released their annual predictions this week and they’re calling for a quiet 2015 season – with seven named storms, three hurricanes and one major hurricane.

Why such little activity?  As it turns out, water temperatures are running below average … although (again) we’re sure that’s the result of “global warming.”

Mia McLeod: The Color Of Civility