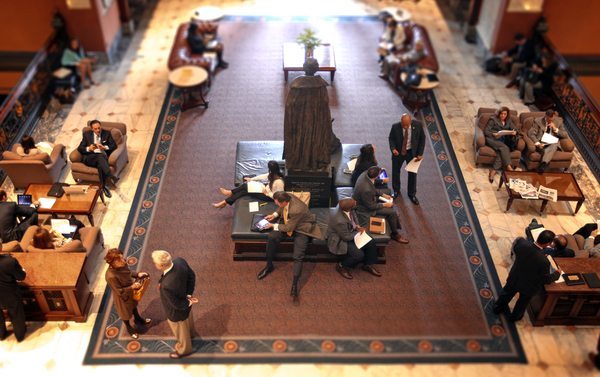 || By FITSNEWS || It’s the biggest joke of a “disclaimer” there is … but it appears on invitation after invitation at the S.C. State House.

“If this solicitation is received by a registered lobbyist, please disregard.”

What do these words really mean, though?  Well, we typed them into our handy-dandy B.S. translator and it spit out the following:

“You are receiving this solicitation because you are a registered lobbyist – now it’s time to pay up.”

We’re referring, of course, to fundraising invitations sent on behalf of members of the S.C. General Assembly – usually to email lists comprised almost exclusively of the very lobbyists who are supposed to be “disregarding” the appeals.

Not only that, these same lobbyists are routinely contacted directly to make sure they received the solicitation they’re supposed to be “disregarding” – with the expectation that their clients cough up the maximum dollar amount.  Which of course is intended to ensure that the lawmakers in question cast their votes in a manner consistent with the client’s interests.

One example of this scam in action?  A fundraiser scheduled for “Republican” S.C. Reps. Todd Atwater and Samuel Rivers.

Anyway, here’s the invite for Atwater and Rivers’ upcoming event (with the boilerplate disclaimer language in the fine print at the bottom of the page) … 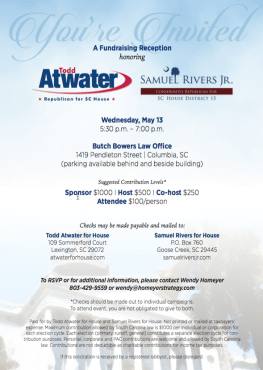 Here’s the interesting thing, though …

FITS has spoken with three separate lobbyists who say they received the Atwater/ Rivers’ invite directly from fundraiser Wendy Homeyer.   In other words they were explicitly sent an email that they were supposed to disregard. 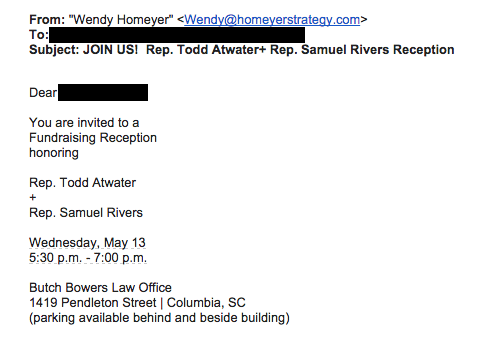 “She got that email because I’m a registered lobbyist, but promptly tells me to disregard,” one of the lobbyists told FITS.

Not only that, two of the recipients of the emails tell FITS they were contacted directly by Homeyer to make sure they had received her email … again, the email they were supposed to be “disregarding.”  The third lobbyist claims to have been directly solicited by Homeyer for similar events in previous years.

So much for “disregarding,” huh?

And before anybody gets the wrong idea, we’re not trying to dog out Homeyer … we’re told this is pretty much standard operating procedure for all legislative fundraising events (no matter who is organizing them).

Sheesh … and these are the people we’re entrusting to pass so-called “ethics reform?”