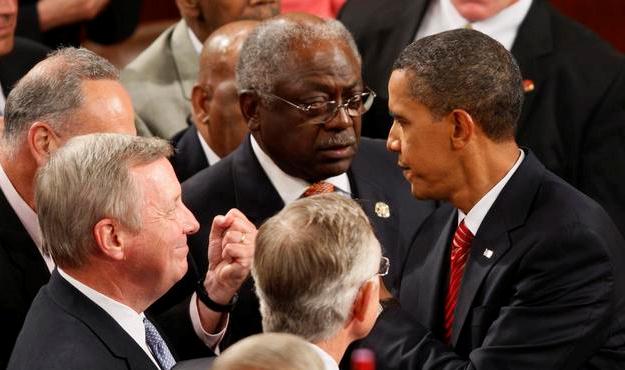 TRAGEDY TAKES A TURN FOR THE CRAZY …

|| By FITSNEWS ||  Memo to Democrats: The next time there’s a tragedy, keep U.S. Jim Clyburn a million miles away from the microphone.

At a time when South Carolina – and the country – was taking up a serious discussion involving officer-involved shootings, police cover-ups and body cameras (all stemming from the tragic white-on-black shooting of Walter Scott last week), along comes Clyburn to irrationally sensationalize and politicize the debate.

“The problem we’ve got is that a climate has been created in the country that’s causing these things to occur all over,” Clyburn said on MSNBC’s ‘Hardball.’

In fact Clyburn specifically blasted one group – the American Legislative Exchange Council (ALEC) – for “drawing up pieces of legislation like ‘stand your ground’ (that) gives a license for people to be vigilantes.”

Wait a minute … what does legislation specifically addressing a private citizen’s right to protect themselves have to do with police violence?  Or efforts by police to cover-up said violence?

Nothing, that’s what.  Absolutely nothing.

Also last time we checked ALEC – like FITS – supports legislation which would wire all cops for pictures and sound.  Which would have likely prevented what clearly appears to be an attempt by police in North Charleston to cover up the details of Scott’s murder.

Don’t bother telling any of that to Clyburn, though.

Wait … what?  Voter ID laws and gerrymandering are now to blame?

“These people are a cancer eating at the innards of our society,” Clyburn continued. “And it’s time for our elected officials to start speaking out about this because the climate that’s being created is not a good climate. And that’s why you have these rogue police officers feeling they have license to do what they want to do and there will be no consequences paid for it. And I think that that’s the mindset of this police officer.”

In an interview with Time, Clyburn took it even further – blaming the tragedy on billionaire industrialists (crony capitalists?) Charles G. Koch and David H. Koch.

“The Klu Klux Klan didn’t run free throughout the South without financial support from some upstanding people,” he told Time reporter Alex Rogers. “And that’s what’s going on here. The Koch brothers may be upstanding people in New York but they are funding these draconian attacks on voting, attacks on young black males—and that’s what ‘stand your ground’ laws are all about.”

For those of you living outside of South Carolina, such crazy comments aren’t surprising.  Clyburn made similarly bizarre claims in the aftermath of the 2011 shooting of former U.S. Rep. Gabrielle Giffords – stating that America needed to “rethink the parameters of free speech” in response to the tragedy.

Our response to his statement?  You can read it HERE.