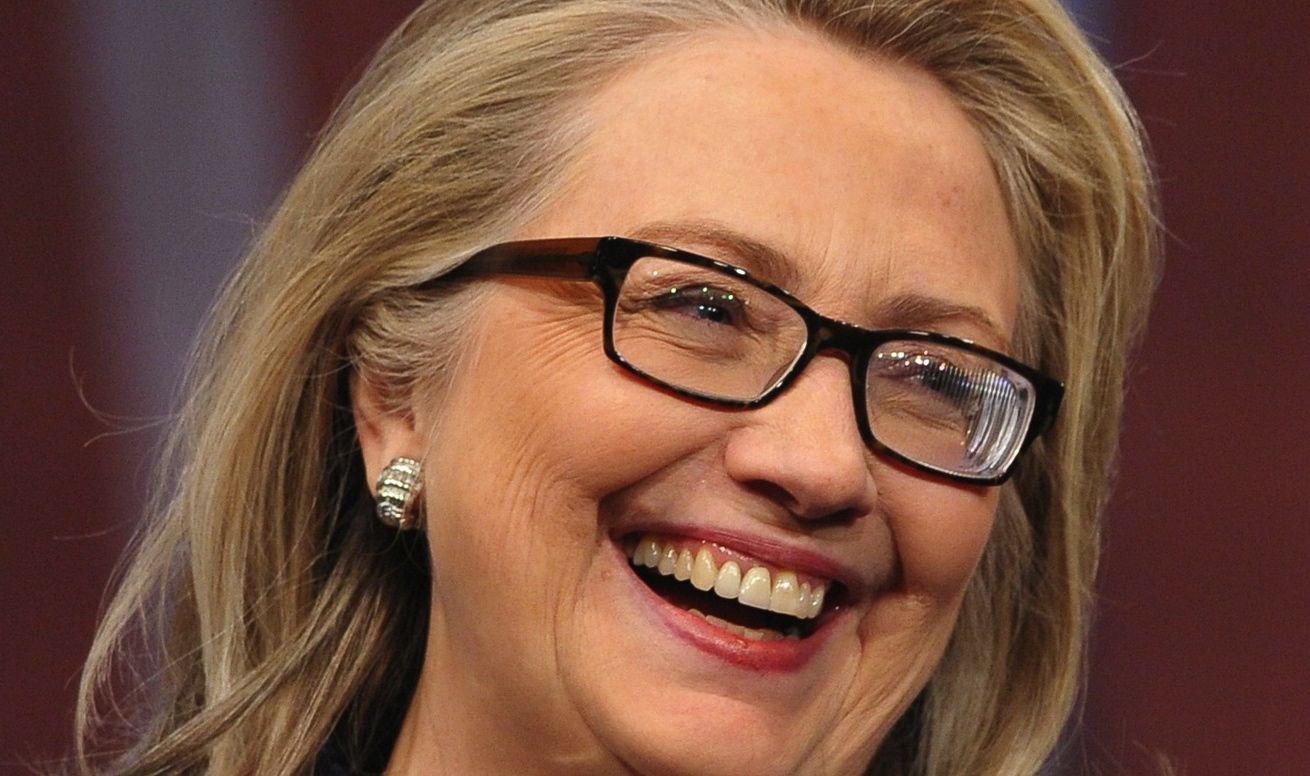 THIS IS LOOKING LIKE MORE THAN JUST A “SPEED BUMP …”

Clinton is suddenly facing a firestorm of criticizing for conducting public business on a private email account … well, multiple accounts, if U.S. Rep. Trey Gowdy is to be believed.  And the email scandal – which is churning hot and heavy among “Republican” types – is being buttressed by a crony capitalist scandal that’s eroding Clinton’s support from the left.

Clinton’s private account was housed on a server located insider her $1.7 million Chappaqua home – and registered to an individual who, as of this writing, has yet to be identified as a living, breathing human being.

Whether this individual – the mysterious Eric Hoteham – is found to exist or not, Clinton is in real trouble.  And that’s before we get to anything of national significance that may have been discussed, negotiated or decided via her “off the books” email account.

How come?  Well, according to a 2009 regulation from the National Archives and Records Administration (NARA), officials using personal accounts are required to preserve a record of any public business done on those accounts.

“This rule is clear,” the liberal website Mother Jones noted. “If Clinton used personal email to conduct official business – which apparently did not violate any federal rules at the time – all of those emails had to be collected and preserved within the State Department’s record-keeping system.”

Not only that, Clinton’s “off the books” email account appears to have been used extensively to circumvent Freedom of Information Act (FOIA) requests – including those which explicitly requested records of public business done on private email accounts (as any good FOIA writer knows to include in their template).

“Republicans” see the scandal as a way to reignite their investigation over a 2012 terrorist attack against an American diplomatic outpost in Benghazi, Libya.  Meanwhile Democrats view it as a way to drive home the narrative that Clinton is a bought-and-paid-for tool of Wall Street.

Either way, it’s bad news for the party’s “nominee-in-waiting …”

Eric Hotham, a big dem operative, husband of a big dem fundraiser. Obscuring the identity with a slight misspelling
http://freebeacon.com/politics/is-the-mysterious-eric-hoteham-actually-longtime-clinton-aide-eric-hothem/

The ENTIRE Obama ainistration has been a scandal and transparent as a bucket of horse manure, just like Haley’s!

She learned from the master.

Maybe Ms. Clinton’s deleted emails can be found by an IT expert just as the supposedly “irretrievably lost” emails of IRS employee Lois Lerner were.

Or the ones that ended up on an RNC server back during the Bush years?

Willing to bet that she has 100% of all of the emails – and will produce them all. That family is a well oiled political machine. And the GOP will let this die a quick death because – they do it too. It’s like trying to make an issue out of kissing your spouse. They all do it. They also kiss other spouses, non-spouses, young girls – but they ain’t gonna bash each other over it. Mul-boy will make a stink for a week, then get a call from Cruz, Christie, Jeb, Walker, Rubio and Paul saying – “let up, we all use our personal emails to avoid stuff.”

Yes, Clinton has said release all the emails. She does not care. But like Benghazi, its a Fake News scandal. All those other guys just accidently lost their emails, just like the Bush and Rove emails that went missing. But that was not a scandal, because they have an R.

republicans delete emails before leaving office, mitt romney did it, mark sanford did it, nikki haley will do it. would not be surprised if it is both private and work emails.

The REAL story is she is a f*#k! ng joke, and FITS and the Democrat Party are just coming to terms w that reality….

I told you this months ago…

Sell, at least we know you’re also GUEST. Any other Handles you want to admit to?

Wow, you told us a few months ago. The rest of the planet knew this around the 1980’s. How about you STFU and let the adults talk politics while try to bring Epic Fail Blog.com back to life. HAHAHAHAHA!

You can’t stand it when I show up you and FITS..and make you look like the Brain-Dead F*#ks you are…LMAO…

I think I remind you of how vapid you really are…don’t blame me for that…it may be a good idea to get in line behind me, if I’m that much smarter than you…

It never ceases to amaze me how some people will defend a person just because they have an R or D after their name.

or for that matter attack an individual and ignore crimes from others just because they have an R or a D.

Just like going going after or blaming previous administrations be they R or D. We only have one President at at time.

Blame should be assess where it belongs, not on who is President at any given time. The problem with the far right is that Obama is to blame for anything and everything they perceive as bad, even those things that occurred before he was President. The economy collapses in late 2008 and early 2009, unemployment goes through the roof, and Obama is to blame.
Unemployment goes down, the economy improves and its all in spite of Obama.

I agree Bush had his problems in many areas but I expect current Administrations to fix problems not blame previous Administrations. Is the economy better, yes but aside from that the problems inherited have gotten worse.

What problems have gotten worse? The country was on the brink of economic collapse in December of 2008.

I said the economy is better what more do you want. If you don’t know what the other problems are you must be wearing blinders or you think there are none.

The REAL story is she is a f*#k! ng joke, and FITS and the Democrat Party are just coming to terms w that reality….

I told you this months ago…

Fuck up much? What a circus clown. Is it any wonder your blog failed? LOL

50 years ago I learned the best way NOT to check a baby’s diaper for stink was to stick your finger in it.

I don’t care if you poured lighter fluid on your finger and set it on fire the stink would not go away.

Cackle – a raucous, clucking cry of a bird, typically a hen

“the hen was cackling as if demented”

That was scary, entertaining, creepy, and enlightening all at once. You don’t get that every day… ;-)

Jim it was a play on your comment pointing out hillarys canckles. Lighten up brother

“HILLARY CLINTON’S SCANDAL IS METASTASIZING”
So is her face…

Hahaha, this was a leak from Clinton to get it out of the way before she announces. A fucking email server doesn’t have legs. She already said she will give whoever the emails requested and guess what, they will be the same emails she gave out during the Benghazi witch hunt making some people look foolish and the whole thing blowing over when she announces in the summer.

Maybe she’s talking about giving us the deleted e-mail messages this time.

Thank GOD Trey Gowdy has something important to investigate. “Hillaghazi” should keep him and the other children occupied for the next two years– sort of like a cat chasing a laser point– just sheer entertainment.

“Thank GOD Trey Gowdy has something important to investigate”
What a creepy little turd Gowdy is!

This is nothing more than a bullshit and bafflegab story being pushed by some so-called journalists who are too fucking lazy to do any real reporting.

Exactly.I wish I could make $ 99,000 profit on a $1,200 investment in one year in the cattle futures market…since she hasn’t had a driver’s license in nearly 20 years, Billiary can truly relate to the little man…I mean doesn’t everyone make $300 grand for a 20 minute speech?

you seem mighty envious of someone elses success

Well, Jeb and Scott did the same thing, so I guess they have drop out too? EMAILGAZI!!! God, you fuckers are funny.

So did Failin’ Sarah Palin. Must be nice for republicans to have a place to have where they’re press releases are printed without the slightest bit of research. Good job, FitsNews!

Old “Slick Willy” gonna be back up in the big house!
YOU BETCHA!

Why didn’t Sic keep some of the better emails from Naughty Nikki? Crashed hard drive? Too busy to write?

What difference does it make now?

Good point, same could be said for murder or anything else too. Of course, all the officiao intra govermental e-correspondences of the Union’s top government also official of the state dept in the hands of foreign enemies may not be a positive thing? Could explain how Putin kept playing Obama like a fiddle over the course of a few years. Go Hillary! Can we get some more her poor sportmansship PUMA (party unity my ass) hacks that she tacitly supported out here to continue explaining why Hillary – the person – is so much more important than any other candidate, the party, the office, the country etc ad nasuem.

she has nice teeth.

“she has nice teeth.”
Now euwe max you be nice! LOL

My new neighbor from Amarillo recently moved to my street. She is an adorable filly, cute but shy. So far I’m the only guy who has seen her, which means I’m the only dog in the hunt. She is a petite little gal whose son ( a long-distance truck driver) asked me to “look after her” and told me that she doesn’t talk much but is a good listener. She’s the sweetest, most beautiful woman I’ve ever met. Max, she is the only woman I’ve ever met from Texas — and I would have thought they would be tall, wild, and obnoxious. If I had known you were hiding women like her in Texas I would have been across the state line years ago. When I am around her, though, I am a much quieter, calmer, saner person (?). Even her dogs have accepted me as a friend (always a good sign!) .

I went to school in Amarillo. Too cold.

Interesting…she talked about the cold, strong winds and the tornadoes. She has concerns about high humidity here — hope it isn’t going to cause any health problems for her. I’ve been reading about Amarillo, and didn’t realize how far north it is, but it’s an interesting city.

I still remember as a little boy, being able to see 8 tornados at the horizon from my back yard.

About three years ago I was looking across the fields when that big dark cloud appeared and it had five “fingers” twisting and dancing. I was fascinated and kept watching it slowly move and then I realized these could join to become a tornado. When it passed from my sight I didn’t think about it again — until the next morning when I learned that it did become one three miles past me and did some tremendous damage. This is the only time I’ve seen that happen.

This week, fur sure.

Her smile is enough….

Thanks for this one – I had to search back for it, and I’m going to have some fun with it with Adorabella…..

Don’t mess with Texas? “… You can have my girl, but keep your hands offa my hat …” – Lyell Lovett

Seen the photos of Harrison Ford’s vintage plane crash? Lucky? He lands on a golf course next to TWO DOCTORS! My best wishes to him for his recovery.

Reviewing my notes I can’t find anything humorous or dramatic about it anymore….

nothing dramatic about crashing into the ocean?

Probably next to 8 lawyers too.