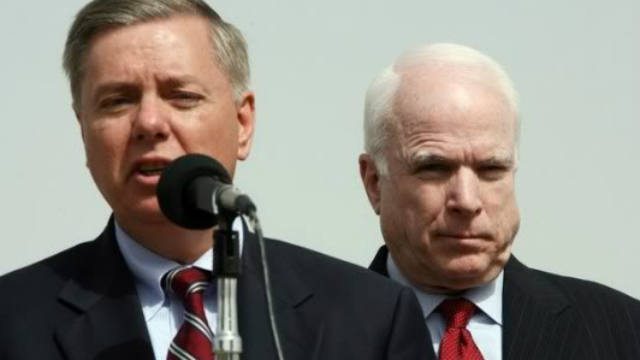 “SOMETIMES, HE IS COMPLETELY OUT OF HIS MIND …”

|| By FITSNEWS || This website has consistently rebuked the “invade everybody” foreign policy espoused by warmongering U.S. Senators Lindsey Graham and John McCain … but this demonstrably failed approach to waging “War on Terror” is receiving fresh national scrutiny in light of Graham’s presidential aspirations.

In a must-read article published on Foreign Policy, columnist Michael A. Cohen takes Graham to the woodshed over his “neoconservatism.”

“I’ve been more right than wrong when it comes to foreign policy,” Graham said in making the case for his presidential bid.

Really?  Hmmmm … how is that possible when his allegiances shift on a dime?

“Lindsey Graham is, in fact, far more often wrong than he is right. Occasionally, he is more than just wrong: Sometimes, he’s completely out of his mind,” Cohen wrote.  “In a town filled with threat-mongers, fear-merchants, and hand-wringers, there is no one mongering more threats, selling more fear and wringing more hands than Sen. Graham.”

“If he’s not exaggerating a threat, (Graham)’s bloviating about how a lack of determination has left Americans vulnerable,” Cohen continued. “If he’s not recommending that Americans be sent into harm’s way, he’s pooh-poohing the notion that diplomacy or any form of coercion that doesn’t include bombs, can be effective.”

Again … spot on.  And exactly what we’ve been saying for years.

Graham’s fear-mongering is the stuff of legend. But it isn’t just idiotic and hyperbolic … as Cohen makes clear, it’s worse than that – it’s reckless and dangerous.

Half Of U.S. Government-Run School Population Is Low Income