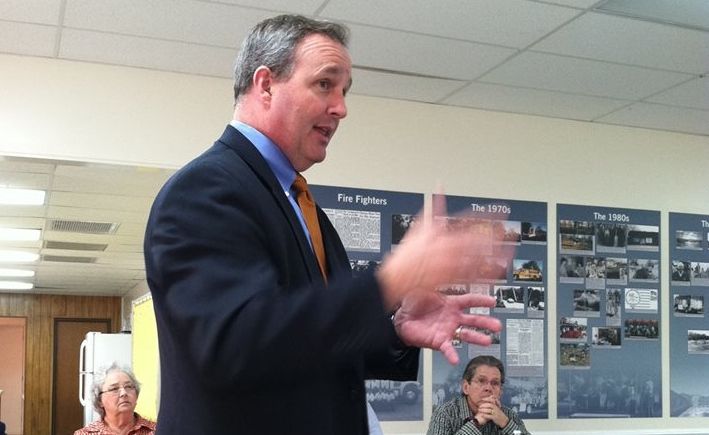 “Though I have been a critic of many of the President’s actions I think it is important to give credit where credit is due,” Sanford said.  “Accordingly, I am encouraged by the President’s move today to ease restrictions for Americans wanting to travel to Cuba and the promise of efforts to begin a dialogue with the people of Cuba.”

According to Sanford, the move was “wise” as well as “a statement of the obvious” – namely that America’s isolationist policy toward Cuba wasn’t working.

“I have major problems with the Administration’s unilateral decision to move towards normalized relations with Cuba,” he said. “President Obama’s statement today of ‘a new course in our relations with Cuba’ is a complete reversal of U.S. policy without receiving any concrete reforms by the Cuban government, which is required by U.S. law.”

Duncan added that Obama’s decision “wastes decades of hard work to support the Cuban people, provides Cuba with legitimacy that ten American presidents have refused to provide, and strengthens the Castro regime to the detriment of the Cuban people and the region at-large.”

Echoing the sort of hard line advocated by U.S. Sen. Marco Rubio, Duncan vowed to work with “colleagues in the House Committee on Foreign Affairs to require accountability from this Administration on this issue.”

Hmmmm … we’re with Obama and Sanford on this one.

And yes, this will probably be the only issue where this website, Mark Sanford and Barack Obama are in agreement.

Jeff Duncan couldn’t find Cuba on a map if you gave him a map with an arrow pointing towards Cuba. He is a partisan clown looking for another reason to bitch about Obama. I wonder if objects to our doing business with Russia, China, half of Africa, etc.
Asshole.

Must not have a connection to the mullah that could be made.

Guantanamo Bay stays open, an embassy won’t open as congress will never approve an ambassador and congress will cut off all money for ‘Obama’s Communist Folly’.

What is the difference between a Corporate controlled government and Communisum

Average monthly wage in Cuba is $20 bucks per month and you get one loaf of bread a week?

People starve in the US, You did say, $ 20 bucks, Your getting warmer to the answer I wanted.

Okay. How about organizing a LGBT march to Castro or Putin’s spread?
In ‘corporate’ America you would be on television, get get free dildo’s and a pack of condoms from a sponsor.

In a communist country we wouldn’t see you again or if set free, would sound/look like that poor brainwashed, now toothless Jewish fella Cuba released yesterday.

Not the brilliant Tango. Rocky, everything is ‘old noise’ to you socialists when it is the truth.

So your answer is ?

Hey ASSHOLE that’s almost as good as you get in good old South Carolina.

And yes, this will probably be the only issue where this website, Mark Sanford and Barack Obama are in agreement.

So is it still imperative at all costs that Sanford NOT be defeated for renomination in 2016?

First time I have disagreed with Sanford. Strike 1. :-) He is also on the same side as JImmy Carter on this issue.
We got nothing from Cuba. No promise of any kind of reforms in the area of human rights. All Obama is doing is funneling money to his fellow marxist ‘thinkers’ in Cuba.

One good thing is that it really changes nothing-just like Obama’s illegal immigration EO (NO path to citizenship or voting).The average American will NOT be able to travel to Cuba (you have to go thru the State Department) and the embargo stays in place.

I’m sure someone else said the same this about China in 1971.

Please don’t compare Nixon and China with Obama trying to find a way to funnel money to the communists in Cuba.

what the fuck goes on in your tiny little mind?

Did it bother you when Nixon and Kissinger went to China while Mao was only starting to slow down the Cultural Revolution?
God knows Mao didn’t promise those two anything but fame for shaking his hand.

Nothing bothers me you fucking nazi POS-except someone that talks about my deceased mother.

I could careless that you are dumber than Deo,Smirks and Rocky combined (Deo and Rocky are the same homo’s that fuck grandrangosuglydog while Smirks watches). Bring my mom up again and will have your food stamps cut off.

Big difference. Nixon was a criminal that LOVED this country. Obama is a lawless, ‘closet’ muslim that supports the goals of communism.

Sanford sees another trail to be hiked in Cuba!
maybe he will take Haley with him, like their China trip!

Why would he want to take that wore out skank, when there is some primo Latin tail to be had?

Sanford only wants to go to Cuba on a “fact-finding mission” on the taxpayer’s dollar. Why? Well, he wants to hook up with some hot Cuban Nookie.

And they ARE HOT, great answer shift.

Hey, thanks for tip!

Well, even if he’s right for the wrong reasons, he’s still right.

The Right Wing kooks will come out in force(they already have).

They will raise Hell.Promise all sorts of retribution.Yell and scream etc etc etc.

Then a few years down the road ,when the cruise ships are docking in Havana,nobody will much care about it anymore,except ,of course, the USUAL Right Wing kooks.

Uh really?!… think Roe v Wade settled the abortion debate?… well guess what?, gay marriage will be the new abortion debate… regardless of how much young indoctrination you try to do to normalize the disorder in order to make this a non political issue

Even a blind squirrel finds a nut sometimes.

You beat me to it!

Mark Sanford has met a new woman whom he wanted to get to know better. But he wanted to determine if she had the
intelligence to be discreet. Sanford tells her that he has figured out a code system so that no one else can find them on their dates. He explains to her about latitude, longitude, degrees and minutes.

He then asks her, “Suppose I asked you to meet me for dinner at 23 degrees, 4 minutes north latitude, and 45 degrees, 15 minutes east longitude? We’ll have a sumptuous catered meal with champagne, and then we’ll have mad, passionate love all night?”

After a confused silence, she volunteers, “I guess you’d be eating alone.”

If Obama announced the sun rises in the east, Duncan would convene a “Faith and Family” meeting to denounce his overreach — and charge it to the taxpayers.

If Obama announced the sun rises in the east.
Republicans pass bill denying any funding for any movement of the Sun.

the awful thing is that this is basically one guy trying to do the right thing – on cuba, on immigration, on health insurance, pot, gay marriage, libya, isis, so many issues. zero help from democrats who don’t have the courage god gave a possum, and nothing but treachery from republicans who serve only the one true god, and his brother Charles. what a weird system of government.

No no no, Charles is part of the holy trinity. David, Charles, and Sheldon.

and by the way – Fits – you, sanford and obama agree on the basics of a preponderance of major issues, along with most literate adults.

So I guess the argument being made against Cuba is that they need to make Human Rights improvements before we normalize with them. Really?!?! You mean like USA Human Rights? Like gun violence, racism, oligarchy, and water-boarding? “MURICA!!!!

It is mindboggling that all these GOPers are talking Cuban human rights when last week they were defending the USA in its illegal torturing.

But we only do it to the evil people, 100% guaranteed. Not one innocent person tortured.

He said many U.S. farmers would back Obama’s moves because the country is a new market for their crops.

“The 50-year embargo just hasn’t worked. If the goal is regime change, it sure doesn’t seem to be working and probably it punishes the people more than the regime because the regime can blame the embargo for hardship.”

Of course, here he is just plagiarizing from Hillary Clinton’s book, “Hard Choices,” that the embargo was a failure that gave the Castro regime “a foil to blame for Cuba’s economic woes.”

So why do we have to do anything with Cuba?… is it because Fidel and Raul picked up the phone to call their communist bud, Barack, and said, hey, we need your tourism dollars because our financial pimp, Venezuela, is struggling in this era of low oil prices to keep us afloat… seriously, other than such a scenario, why now?… it’s been 50 years, certainly we don’t gain ANYTHING from this…

FITS, are you with him on policy and his decision to use an executive order to circumvent Congress, or just the policy? The policy I can see because it is in the spirit of free markets, but the unilateral action is a different story. If its within the president’s powers, then that’s ok – I have no idea.

Obama is not changing anything that is codified in Helms-Burton.
That’s why that faggot Lindsey Graham is talking about legislating defunding on the embassy in Cuba; it’s not covered by Helms-Burton.

Sanford’s right (even a blind squirrel …)

I mean really, who cares about Cuba anymore? We’re bff’s with Vietnam and China for God’s sake.

We’ve probably got more ex pats living in Vietnam than anyone knows.

Anyone who thinks it makes sense to continue a policy that hasn’t achieved what it was supposed to achieve in 54 years is a total, complete, abject idiot.
Now, Mark is an idiot, too. But, he likes Latina ass.

Did Duncan ever get Hillary’s footprint off his ass?

“Cuba, California could prove to be powerful partners”
By Carla Marinucci and Joe Garofoli – 12/17/2014 – From the San Francisco Comical – http://www.sfgate.com/politics/article/Cuba-policy-change-good-news-for-California-5963581.php

decades of hard work to support the Cuban people

This is what the dumbass wing of Republicans actually believe.

This reaffirms that Duncan is fucking idiot. He doesn’t have clue in what is going on, nor has any-any expertise on the Cuban issues. This clown graduated from “Clumson” with a degree in “social science”, worked in a back water bank as a teller and had a business selling foreclosed houses. Now I tell you this one hell of deep resume. Oh I forgot Duncan claims that he prays to Jesus before he makes any decision. Hmmm, I guess Jesus forgot to tell Duncan that The Pope was involved?

Duncan is a fool with an uneducated voting pool which makes it even worse and him more embolden.