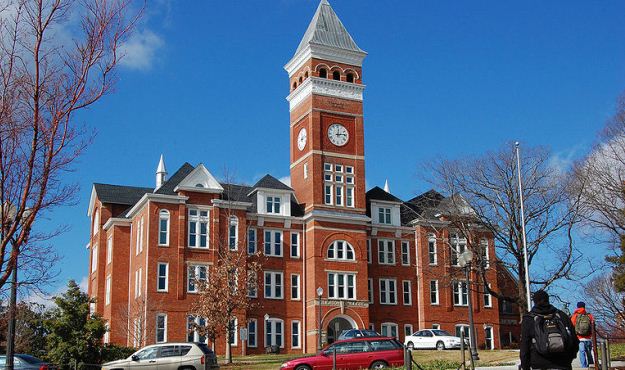 Most viewed DiSabatino’s ouster as fallout from the ongoing fraternity scandals at Clemson – including the as-yet-unsolved death of 19-year-old student Tucker Hipps back in September.

But was DiSabatino canned because she didn’t do enough to rein in the frats?  Or was she booted for cracking down on them too hard?

According to a story published this week by Inside Higher Education, DiSabatino’s ouster was met with much rejoicing by the fraternity community.  Specifically, they questioned her decision to temporarily suspend fraternity social activities in the wake of Hipps’ death.

“DiSabatino’s involvement in the decision was not well-received by some Clemson fraternity members who felt that they were all being punished for the misdeeds of a few,” IHE’s Jake New reported.  “Their frustration was reportedly further compounded by uncertainty about whether the suspension would impact the annual tradition of building homecoming floats.”

Because God forbid that happen …

Anyway, when DiSabatino’s firing was greeted with glee by the school’s Greek community.

“Don’t let the door hit your big ass on the way out,” one Clemson Alpha Tau Omega alum tweeted.

The hottest rumor in Tigertown?  That fraternity alumni threatened to withhold donations to the school in the event Greek activities were further disrupted by DiSabatino.

“Clemson previously threatened to ban Greek social activities in 2010, prompting some Greek alumni to email the university saying such a suspension would jeopardize donations to the Clemson Fund,” IHE reported. “Some faculty and students had speculated that similar threats had been made leading to DiSabatino’s departure.”

A spokeswoman for Clemson told IHE such speculation was “unfortunate and uninformed.”