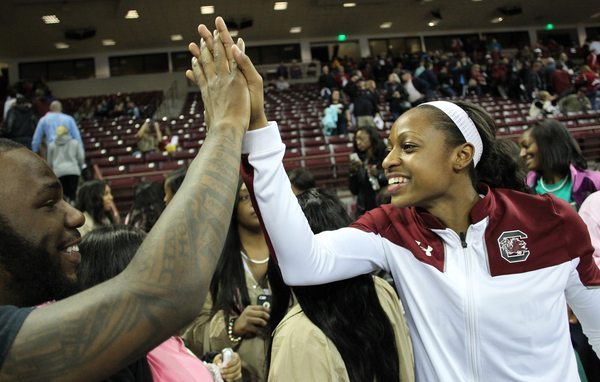 By FITSNEWS  ||  While the University of South Carolina men’s basketball team looks to get things on track this season, the school’s women’s squad has reached the top of the pyramid.

Head coach Dawn Staley‘s Gamecocks are the No. 1 team in America according to the latest Associated Press poll – the first time the program has ever achieved the top national ranking.

“I feel really good about what our team has been able to accomplish,” Staley said. “This is not a goal that we had set, but it is a part of our journey.”

South Carolina – coming off of a 29-5 season and SEC regular season championship – entered the 2014-15 season ranked No. 2 in the nation.  That matched the program’s previous best ranking – held for three weeks during the 1982-83 season.

After beginning her career at South Carolina with a 10-18 record during the 2008-09 season, Staley’s teams have gotten better each year.  In fact the Philadelphia native (and former WNBA star) has won at least 25 games in each of her past three seasons at South Carolina.

She’s currently 124-71 in her seventh season at South Carolina – where her team’s crowds have outdrawn the men’s basketball crowds in recent years (and with good reason).

Anyway, props to Staley and her team …