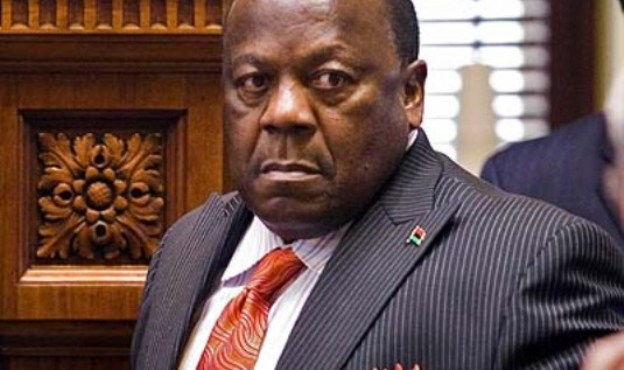 “Collectively, these indictments accuse Ford of obtaining an improper personal benefit from his public office by depositing campaign funds into his personal bank accounts, using campaign funds to pay for personal expenses, and then filing false campaign reports and submitting forgeries to the Senate Ethics Committee,” a news release from the office of S.C. Attorney General Alan Wilson noted.

Ford could face ten years in prison on the misconduct in office charge, five years on the forgery charge and one year for each of the ethics violations.

Ford resigned his seat in the State Senate last May – news of which broke exclusively on FITS.

His announcement came after a Senate panel uncovered evidence that he used campaign resources to make purchases at a pair of adult bookstores.  The veteran Democrat – who was first elected to the Senate in 1992 – was also accused of using campaign funds to purchase penis enlargement pills.

At the time, Ford referred to the case against him as a “public lynching.”  He also pointed out (correctly, we might add) that far more egregious offenses had been committed in office by S.C. Gov. Nikki Haley – yet her offenses which were whitewashed by her fellow “Republicans” in the S.C. House of Representatives in 2012.

“Was this so they could feel good and show Governor Nikki Haley – who has more ethics violations than any other member in South Carolina History – that they could be tough on their members?” he asked at the time.

Good question … one that has yet to be answered.

Haley later advanced an “ethics reform” bill that would have actually moved South Carolina backward on this critical issue.

hahaha…back when “Rob-utfode” was selling cars, I walked on the lot he was working to look at something, and he ended up calling me an “angry white man”, which made me laugh hysterically, and angered him even more.

I would be an “angry white man” as well if my parents named me Norma. On the plus side, at least they didn’t name you Sue.

I knew a guy in Florida whose last name was” de la Sue” and he was employed by (I didn’t believe it a first) the S.O. Bean Construction Company.

Enormous cock. I got that a long time ago. Just playing with words here.

Enormous cock. I got that a long time ago.

He was sending out used car solicitations using his senate letter head back in the early 90s. I was driving to Charleston one Thursday afternoon on I-26, and Ford zoomed by me going at least 130 mph. Caught the special Senate tag on his burgundy car back then. The man, like most of them in the General Assembly, is a cuckoo.

I’d bet there is some real bullet sweating going on about now.

Robert Ford is low hanging fruit, I’m eager to see someone bigger get brought down myself.

Haley better lawyer up with those “Trial Lawyers” she hates so much cause Bobby is about to sing like a bird.:)

If he’d of had anything on her he would have already sung. He’ll wind up in more trouble before this is all over.

He was given a proffer and will be testifying while on polygraph, just like Danny Frazier. Originally, I’ve heard the only truth told by Frazier was his name. After he was informed of the evidence against him, he sang like a bird and is continuing after an interlude and accompanied by a full orchestra!
Harrell will be in the same boat and if he lies, or does not live up to his agreement, he will be someone’s plump little sweet thang!
I cannot decide which I’d like more, him fingering Haley, White, Peeler, leatherman, Martin, or having a highly sexed cell mate?

Can’t find it on Google…but years ago saw this cartoon:

There was a beautiful naked young lady tied to a medieval torture device. Two torturer’s (black hoods and all) were standing nearby, arguing…

Caption:
“That’s NOT what me lord meant by “thumbscrews!”

I’ve got a cartoon where a caveman is carrying a woman over his shoulder. As they pass by another woman she asks the first one, “Why do you stay with him?” She replies, “Beats me!”

Polygraphs are bullshit and not admissible. Too fallible.

Dude, what makes you think Bobby Harrell has any special information regarding any potential Nikki Haley wrongdoing? The two hate each other and have for years. Move on …

Ask Haley what they all know that are about to be indicted. …Lol

I hope he still has some of that lube he bought for when he goes to jail. He can’t afford the lawyers Harrell has.

“… His announcement came after a Senate panel uncovered evidence that he used campaign resources to make purchases at a pair of adult bookstores. The veteran Democrat – who was first elected to the Senate in 1992 – was also accused of using campaign funds to purchase penis enlargement pills. …”

So? What’s wrong with that? Typical political activities, getting out the pervert vote … republicrats do it too.

Haley kicked ass. Get over it.

It’s okay – DO THE CRIME THERE WILL BE NO TIME – if you are a gov’t official or a college board president.

“…was also accused of using campaign funds to purchase penis enlargement pills.”
Indicating he was not the “big prick” I always suspected.

Offer him a deal to flip on the rest of the Senate please. He knows where the bodies are bc he was apart of the murder.

Wilson has no balls, else, he would have already had indictments against all of
them. The pot calling the kettle black?

Maybe the will erect a monument. ….:)

Couldn’t happen to a nicer guy. But, yeah, he is low-hanging fruit.

More to come, no doubt …

Ah, now I get it. It’s the Republicans that are protecting their chosen ones. That explains why Toal has not been indicted yet. She has got Wes Hayes, Glenn McConnell, Tom Davis, Chip Campsen and HughLeatherman all protecting her and all R’s – wink wink.

Dear Brian Hicks………..when you get some time, we feel sure that SMIRKS would love to review your “thoughts” on the work that Mr. Folks has and has NOT done in a revealing manner with this piece. It does not take a rocket scientist to do a Google EARTH overlay of the district which Robert Ford represented. Ya know Brian, just how hard is it to connect some “contractor” dots and efforts that tie back into certain STATE FARM insurance “coverage”..? (both ad coverage and policy) It would not take Robert Ford very long to consider how easy it would be to have EVERY Charleston County School to update its CIVICS and Social Studies homework to reveal just how certain political heat can be “dissipated” via a Citadel chair position for MAYOR Riley and Mayor Swails and “square” developers..! Would it not..? Ms. Anita Zucker is not STUPID..! She knows how to leverage 4 Million dollars.

Brian…………your smart; but its your readers that are getting “fogged”. Lets hope Robert Ford does not realize how to use a “lighthouse”..!

Wil Folks may just be a “star” witness…….

Robert has a state-issued handicap license and a handicap “placard” for his mirror, though he isn’t handicapped.

When I saw him recently at the AT&T mobile phone store on Savannah Highway in Charleston (buying an expensive phone), I said to him, “Robert ! You look well. But you’re ‘handicapped’ ! What ails you?”

Me: “But Robert, you’re walking fine ! You could use the exercise ! You’re healthy !”

He is not going to prison. He will get probation like Harrell. Anything more than that turns into a civil rights mess. Meanwhile … WHERE IN THE FUCK ARE THE FEDERAL CHANRGES AGAINST HARRELL AND LEATHERMAN? Charges against Harrell’s land developer friends in Charleston? Where are those????????

Not to mention one of the masterminds behind Harrell and Leatherman – Jean Toal.

“At the time, Ford referred to the case
against him as a “public lynching.” He also pointed out (correctly, we
might add) that far more egregious offenses had been committed in office
by S.C. Gov. Nikki Haley”

Goodbye Ford, illegal alien lover and supporter. They need to look into his business deals in that area as well!
The republican clubs in SC are about to get slapped in the face. Halleluyah! In fact, when the GOP fails to do anything about amnesty, Obamacare, etc., the “Party” is going to appear as the fools, phonies and liars they are. I welcome Haley, Ford, Harrell, Leatherman, Horne, Murphy, Bennett, and others getting called out; I am relieved that there are still SOME members of the SC General Assembly and AG office that indeed want justice and honesty (or at least they want to get even)
Clean house and with Haley administration cohorts goes her police state entourage. Hail Alan Wilson! Glad I voted for you! SC Chamber of Commerce, Dubai FTZ in Santee, DOT, 1-95 corridor Coalition supporters: all traitors and profiteers. All concocted in the GOP/Dem meetings with Graham and CLyburn….oh LAwdy it goes on and on and I hope they all get tarred and feathered and run out of town with mange.

Why not charge him with “Perjury”??? … He signed documents saying everything was the truth in his campaign reports …. same as Harrell did. Perjury is a felony …. carries 5 years in prison. Even if a person is caught lying in an affidavit, case law is clear that it’s “perjury” as well.

Land Developers in Charleston should be feeling some heat soon ;-)

If they did it to Harrell, and now doing it to Ford .. .then they have to do it to Haley, too. Equal treatment under the law …. Title 42 United States Code Section 1981.

The big dogs are using Senator Ford to make people think they have ethics. What he did or didn’t do is small potatoes. Leave the old guy alone and get to the good stuff.

Another dirt bag going down. Who is next?

Every State Rep. is now a target as are the law firms supporting those elected. Everything is connected to everything. Just follow the money. I know where my money went and who released it.