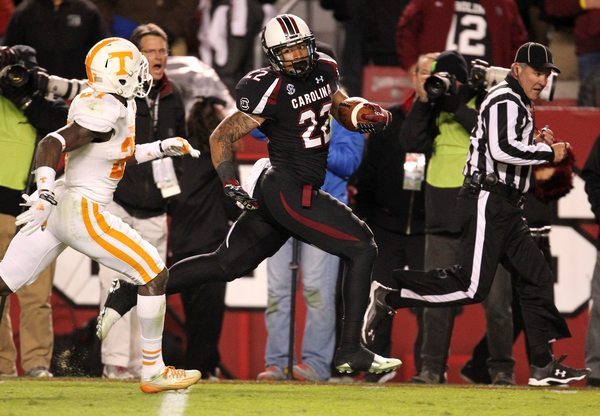 By FITSNEWS || Several things went through our heads when we saw that University of South Carolina running back Brandon Wilds was contemplating a move to the National Football League in 2015.

Here they are, in the approximate order in which they were thought (thunk?) …

1) Isn’t this guy the Gamecocks’ backup running back? (Yes).

2) What is the backup running back on a 4-5 football team doing discussing his NFL options? (Good question).

3) Shouldn’t a backup running back on a 4-5 football team be more focused on helping his team become bowl-eligible? (Yes).

5) Should we cut Wilds’ some slack in light of what happened to former Gamecock running back Marcus Lattimore? (Yes).

6) Is this a chance for us to further pimp our proposal to fully privatize higher education/ pay NCAA football players? (Yes).

But, at least he’ll get a shot to workout for a few teams.

I say go for it, it’s not like he’s going to do anything with his worthless degree anyway. Open up a scholarship slot for the next 3 and out player. He probably needs money for more tattoo’s, which we all know is the ultimate sign of intelligence.

I’m not sure I get the complaints about 3 and out players. I suppose Clemson is more honorable because it’s able to convince gullible morons it’s in their best interest to play for free for another year when they could be getting paid?

What complaint, it’s an observation. Those who think they’re NFL material jump the first change they get whether the NFL thinks the same thing. I guess in Clemson’s defense, that additional year will allow them more of a chance to finish their degree regardless of how worthless it is in real life.

Brandon is a good RB, but not NFL I don’t believe. However, if he can make some money, go for it.

I didn’t think Martavis Bryant would make it either.

Hell, I contemplate shit like that every day on the way into the office. Anybody can do it. Give it a try.

Hope the mull lasted about half a second.

After “shooting his age”*, TBG is mulling a tryout for the Senior PGA Tour when he becomes eligible next year.

Brandon can follow Victor Hampton to a practice squad.