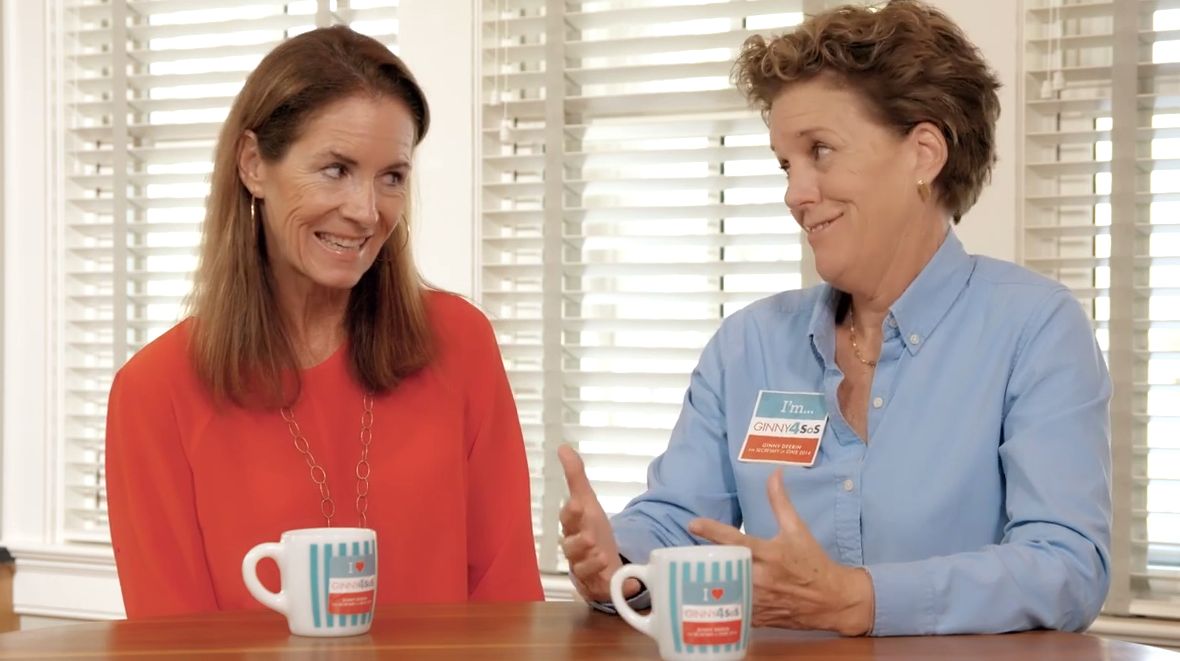 By FITSNEWS ||  S.C. Secretary of State candidate Ginny Deerin picked up an unusual endorsement this week …

The Democratic candidate – who is running against “Republican” incumbent Mark Hammond – taped a video with former S.C. first lady Jenny Sanford in which the two shared their concerns about “Mark.”

“I know you’re trying to keep a bit of a low profile – so your willingness to open up about Mark – well, I’m thrilled,” Deerin tells Sanford in the clip.

“Happy to be here and happy to speak about Mark,” Sanford responds.

The two then converse about “Mark’s” work ethic, which Deerin says “until recently I did not realize was a problem.”

“Mmm-hmmm.  To be honest I always thought when Mark said he was going to work, that he was actually going to the office,”  Sanford says. “Seems I was scammed.”

Ha!  Deerin then laments all of the waste in “Mark’s” office.

“What can I say?” Sanford responds.  “Despite all his rhetoric it seems Mark is a big waster.”

Mark Sanford, of course, dramatically confessed to cheating on his wife at tearful press conference at the S.C. State House in June 2009.  That admission prompted an investigation into Sanford’s travel practices that nearly led to his impeachment in 2010 – and the ensuing scandal (especially his chronic over-sharing about it) ruined his presidential aspirations for 2012.

Jenny Sanford publicly exited the Governor’s Mansion (with the couple’s four children) after attempts at reconciling her the marriage proved fruitless.  She filed for divorce in December 2009, which the governor declined to contest.

In August of 2012, Sanford and his Latin lover Maria Belen Chapur became engaged – and nine months later Sanford pulled off a remarkable political comeback by winning a special election to the state’s first congressional district (the seat he held from 1995-2001).

Earlier this year, though, Sanford called off his engagement with Chapur via a meandering Facebook post – blaming Jenny Sanford’s legal machinations for their split.  However Chapur said afterward the announcement caught her by surprise.

Hammond?  His office issues are considerably less dramatic … although taxpayer advocates like the the S.C. Club for Growth have taken note of waste in his travel practices and endorsed Deerin.

“I’m a conservative. I’m a Republican. And on Tuesday I’m voting for Ginny Deerin,” Jenny Sanford says in the ad.

Will Jenny Sanford’s unconventional endorsement of Deerin translate into an upset win over “Mark” (Hammond, not Sanford0 at the ballot box?

Our sources say no …

“With the establishment squarely behind Nikki (Haley) there’s not much of a chance Hammond or any down ballot (Republican) loses,” one GOP operative told FITS. “The fact that Jenny put her neck out there is interesting and definitely newsworthy, but I don’t think she can pull it off.”

Still … props to Jenny Sanford for finally finding a creative and endearing way to express the unquenchable bitterness she feels toward her ex.  Well-played, girlfriend.  Well-played.