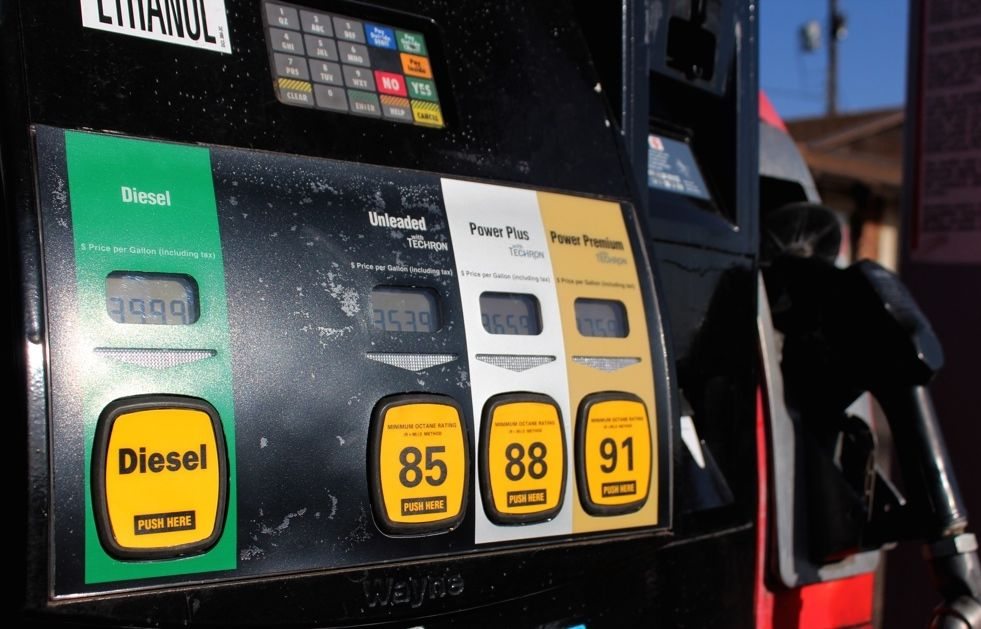 GOOD NEWS AT THE PUMP COULD GET BETTER …

According to the AAA daily fuel gauge, motorists in South Carolina are currently paying an average of $2.96 per gallon of regular unleaded gasoline – cheaper than any other state save Missouri.   And the cost is likely to continue coming down.

Nationally, the average per gallon price is $3.18 – down from $3.27 a week ago and from $3.39 a month ago.  That’s the cheapest gas has been in more than four years – and fifty cents less than its most recent peak in late July.

According to GasBuddy.com, more than 43,000 U.S. service stations – or one-third of the stations it tracks – are currently selling a gallon of unleaded gasoline for less than $3.00 (hat tip to MarketWatch‘s Silvia Ascarelli for uncovering that nugget).

Obviously this is good news … although we’d be remiss if we didn’t point out South Carolinians continue to pay a disproportionately high percentage of their income on fuel costs (given our chronically low income levels).

Also we would reiterate lower gas prices are not a good excuse to raise the state’s gas tax … which is unnecessary if our leaders would simply take the time to stop prioritizing political projects at the expense of long-overdue maintenance.

Gas prices tend to drop in autumn as travel decreases, although this year’s decline has been more pronounced.

What’s going on?  Imagine this: An increase in supply (thanks in no small part to a domestic boom) – and a reduction in demand.  Oh, and increased competition.  So yeah … the free market, in other words.

Domestic production of oil is currently running at 8.7 million barrels a day – a million more barrels per day than last year and the highest level in more than a quarter century.  That’s helped … as has a reduced demand for oil in Europe (which is about to enter another recession) and Asia (which is increasingly relying on other energy sources).

What are prices like at your local filling station?  Tell us your experience in the comments section below …

Of course they will continue to mysteriously drop all the way up until elections, even though Barry has no control over gas prices. Right!?!

Correct, only it won’t stop after the election.

Right. Saudi Arabia is dumping cheap oil on the market and that’s why prices are going down. There is a price war going on in the middle east, which is causing a rapid decline in the cost per barrel. It’s all Obama’s fault….. sarcasm font…

Interesting that these “price wars” seem to occur around elections.

Gas prices have been down here for months. Wonder what caused that?

I gave the House of Saud their annual blow job.

That was GWB’s job.

Maybe, but Barry actually enjoys cock in his trap.

Like most of GWB’s policies, I’ve just continued that one.

Him too! I understand the Prince thought his were kind of “toothy”.

I’ll take that bet. I will be buying COP & CVX about the 10 days from now.

even though Barry has no control over gas prices.

Yes, the White House has a little lever that controls gas prices. That’s classified information, though.

Seriously though, the president has little control over gas prices. They were high under Bush, they are high under Obama. If you want less pain at the pump, consume less gas.

Well, if He cut loose on The Pipeline, then the “progressives” would lose control of Big Oil.

Duh, the “pipe line ” is to get the Canadian tar sand oil to ,the gulf state refineries for export.
Fear not, plans are in the making to use Canadian under utilized natural gas lines to move the crude to the Atlantic coast of Canada for export.

Not! The Canadian pipeline runs through several states and “T’s” into dozens of existing pipelines ate several “christmas tree” junctions. Yes, some of the crude will go to refineries in New Orleans, but most of it will feed other refineries through the existing pipes … Like refineries in New Jersey on the Hudson for the New York and points “down east”. Refineries from Kansas to Chicago to the rest of the South will also be connected.

What? You think these pipeline builders are stupid and would spend all of that money for just one refinery or one market?

The “tar sands” requires different refining techniques than Pennsylvania crude, or North sea crude, Or Arabian Lite crude. The only refinery presently operating that can handle it is on the Gulf coast.That is why the line is DEDICATED to the Canadian oil.

Never said there was a shortage od oil.
Interesting that you change the subject rather than rebut.

Well, if He cut loose on The Pipeline, then the “progressives” would lose control of Big Oil.

Most I ever paid was $3.69, that was when “W” ran the show.
Paid $.79 for intermediate during Slick Willy”s second term.

Exactly. Don’t be fooled. Once the elections are over, the ratchet effect will be in place. We’re used to 3.50 gas, we’ll be acclimated to over 4.00 gas… Then 3.50 gas will seem like a bargain. But, don’t expect wages to keep pace.

Probably. Unless the administration gets the big weenie and has to bail on commodities manipulations. If the demo-Fascists start to lose money themselves in the markets (congressional insider trading still abounds), then bar the door, Nellie … They may even have to declare to a “tax holiday” to keep the masses in check.

This gas price story is defective. There is no shapely female posterior in the picture. Mr. Folks please fix your article.

No cameltoe no care.

Was there for Fall for Greenville last weekend, reminding me what a shithole Columbia is.

Gas prices averaged below $2 a gallon for Bush’s 8 years. The ONLY time the media alluded to gas prices was when they rose a little. And they pinned it on the Bush Administration. And then we had JOBS, rising salaries and opportunities.

When you get down to $2 (under Obama) and stay there, and you add jobs w/ decent pay…post an article bragging about gas prices. Until then STFU…

You better hope you can get $1.50 for a movie. Hollywood is in a state of collapse. No one is watching the filth and liberal propaganda trash they are trying to sell. Kinda like Obama.

Check this out. Bush started his administartion with nearly record low gas prices, and they rose steadily until the economy fell off the cliff in 2008. It fell dramatically just as he left office. Then it returned to the pre-2008 level and has drifted downward since.

Your bullshit has just be debunked.

As I said before, Slick Willy’s second term had the lowest prices.

I lived it you F*#king idiot. It was not that long ago.

I’m not subject to your re-writing of history, and the Crap you liberals feed to dolts to cover for your ignorance and failure.

LMAO…Hahahahahaha…That chart you linked indicts your STUPID liberal Obama @$$…after 2008, prices skyrocked…w/ some rise, after Congress was taken over by Democrats…Hahahaha… (: …

I’m new to this scene. Are you retarted or something?

Ive been here a while. How often do you bully special needs children?

Gas Futures closed at 2.17 a gallon, down 7.5 cents today and oil was down 4.7% today. Thank you Saudi Arabia and your hatred for Russia. With the strengthening dollar and the OPEC countries needing money, they will pump more than cut back. So yes, Gas will continue to go down.

You forgot transportation cost as well, which is normally .10 or so a gallon. but yes on the rest.

Transport costs are included in the pump price and averaged into the Gas futures price at the time of “market made/settled” (end of futures contract).

Transport costs will decrease with the new pipeline … Oh Bummer.

Generally it’s not SA hatred of Russia so much as it’s hatred for Shale. They pump because they hate the US. Put shale out of business and they can begin sticking it up the USSA’s backside again.

A for effort though

What’s going on? Expect low oil prices for a few Y-E-A-R-S. Saudi Arabia is behind the oil production cuts. They are upholding their part of a secret agreement with the US. Low oil prices crush Vladimir Putin’s Russian energy profits.

Saudi Arabia to pressure Russia, Iran with price of oil

Saudi Arabia will force the price of oil down, in an effort to put political pressure on Iran and Russia, according to the President of Saudi Arabia Oil Policies and Strategic Expectations Center.

To pressure Iran to limit its nuclear program, and to change Russia’s position on Syria, Riyadh will sell oil below the average spot price at $50 to $60 per barrel in the Asian markets and North America, says Rashid Abanmy, President of the Riyadh-based Saudi Arabia Oil Policies and Strategic Expectations Center. The marked decrease in the price of oil in the last three months, to $92 from $115 per barrel, was caused by Saudi Arabia, according to Abanmy.

With oil demand declining, the ostensible reason for the price drop is to attract new clients, Abanmy said, but the real reason is political. Saudi Arabia wants to get Iran to limit its nuclear energy expansion, and to make Russia change its position of support for the Assad Regime in Syria. Both countries depend heavily on petroleum exports for revenue, and a lower oil price means less money coming in, Abanmy pointed out. The Gulf states will be less affected by the price drop, he added.

The Organization of the Petroleum Exporting Countries, which is the technical arbiter of the price of oil for Saudi Arabia and the 11 other countries that make up the group, won’t be able to affect Saudi Arabia’s decision, Abanmy maintained.

The organization’s decisions are only recommendations and are not binding for the member oil producing countries, he explained.

Interesting take. In 1867, the price of a barrel of oil was ~ $35 per. The costs of extraction has slowly but steadily declined since, hitting a bottom in 1934. Now, the costs of extraction have been increasing steadily since … and is again approaching $35 per barrel. That’s The Real Costs of Extraction from deep drilling. All of the rest of the “world futures prices” include lease fees, fines, vigorish, inflation, taxes, tithes and tributes to g’ments and politicians and other thieves.

We are entering a new age of abundant oil. It is not just price that matters to the Saudis or other producers. Market share is equally important. While prices are fungible, transportation networks and refinery processes for different grades are not.
It amazes me how biased people are toward believing that someone is in charge. Free market pricing of oil on the world market is not an international policy is an inalienable law. There is no country or combination of nations (OPEC) that can control prices. Saudi Arabia tried in the past to keep prices up and it has backfired in loss of market share. They have also tried to hold prices down and we’re unable to meet demand and the end customers paid the the higher world market price anyway.
Since the seventies, market sets prices and no one is in charge. Much of the new oil discoveries are expensive and difficult to get. This and demand is going to control prices. Demand is now falling because of weakness in the economies of Europe and Asia. Prices will fall.

Incorrect my dear. Prices are falling because SA wants to put shale out of business. They could give a rats patoot about anyone else making money. They can match what any 3 countries are outputting at any price and still charge a buck more per.
D- for effort. Reuters? Really??

screw Russia, screw OPEC, screw the Middle East. Sorry bastards. We will win the energy war in the long run.