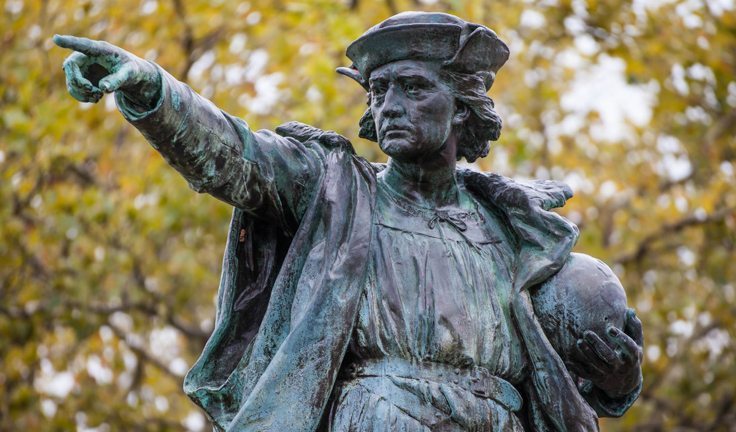 By MANDE WILKES  ||  Oh, how I wish to be the sort of person who could blithely wish y’all a happy Columbus Day, and simply let people enjoy their day off. Alas, this ill-advised “holiday” only reinvigorates my contempt for government, colonialism, contrived designations and nationalism.

The reasons why we should roll our eyes at Columbus Day are legion, and I won’t here bore you with a rundown of the revisionary history that makes this “holiday” equal part sham and shame. Wikipedia more than adequately lays it out, if you’re that interested.

(Nonetheless, a pearl of wisdom: Christopher Columbus never in fact set foot on the land that would become the United States).

What I’d rather discuss is this: Has America’s “discovery” been good or bad?

Wait … in a post-Patriot Act world, I could probably be gagged and bound for suggesting that our nation might not be exactly gilded.  Better that I reword: In what ways would the world be different had Columbus not paved the way for European colonization of native American lands?

There’s a lot of talk from a lot of people, about the U.S. having lost its (her?) way.  I’m guilty of this, too, even though I find that kind of romanticism both tired and inaccurate.  Yet it persists, this idea that America was once upon a time a good and righteous place, founded on good and righteous principles.

Principles like, I suppose … slavery and treason and genocide.  Because the fact is that those institutions germinated America’s birthright.  Which is why it’s silly to pretend that the country was “on the right track” at some point in the past – whether you think that point was during Ronald Reagan’s tenure or pre-segregation or pre-Obama or post-Bush or whenever.

For all my perceived cynicism, I’m inclined to believe our country has gotten better – not worse – since its inception. Though that’s damning by faint praise for sure, since the inception was pretty freaking awful.  It strikes me that six of the eleven federal holidays have been set aside to commemorate acts of either treason or wartime activity.

But that’s not remarkable, really, for a country that arose from those very pursuits.  What’s that saying?  Live by the gun, die by the gun.  Or something.

Bitterly ironic is how the same conditions that led to America’s establishment have wormed their way into our system.  The onerous taxation, the preponderance of money in electoral outcomes, the aristocracy of the lobbying class, the squashing of speech in deference to “security” … and on and on.

Oh, another bitter irony?  Columbus and his men brought communicable diseases to the natives.  Today, a growing number of officials want our borders locked down in order to prevent wanderers from arriving with Ebola.

If nothing else, today is good for reflecting on from whence we came, where we are, and where we’re heading.  Or you might be just as happy to take advantage of the furniture sales, which would be more in line with the American way, no?