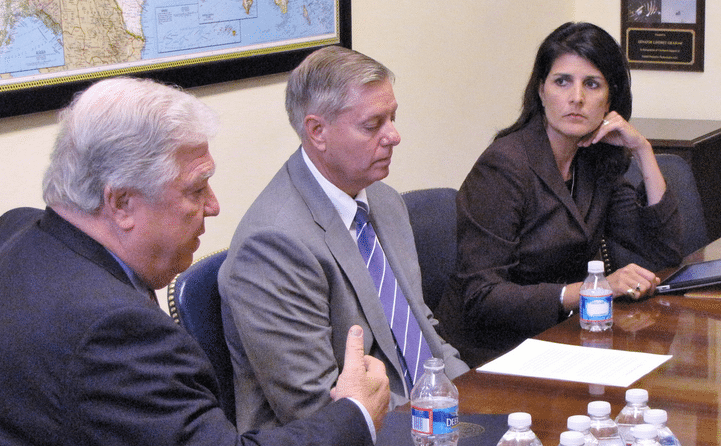 By FITSNEWS ||  U.S. Sen. Lindsey Graham has no chance of becoming president of the United States.  Nor does he have a chance of becoming the “Republican” nominee for president.  Let’s go ahead and get those two important points out of the way … along with the No. 1 reason for why not.

So … why is Graham making noise about seeking the highest office in the land?

As it stands now, the road to the GOP nomination runs through Iowa, New Hampshire and South Carolina – and no nominee tacking to the fiscal left and to the left on divisive issues like immigration (read: amnesty) or education (read: common core) is going to win the Palmetto State.

“He is loathed by four-in-ten GOP voters in his home state but this intensity of contempt (for Graham) obscures a centrist base he can reliably draw from,” one national pollster who has been tracking Graham’s numbers tell FITS.  “If the Democratic primary becomes a coronation of (Hillary) Clinton, Graham becomes even more of a factor.”

South Carolina is an “open primary” state – meaning Democrats can cross over and vote for a Republican if they so choose.  That prospect becomes even more likely in the event a Democratic primary election is not deemed to be a competitive race.

What kind of “factor” could Graham be?

“He could skew the vote – or even win,” the national pollster added. “In the absence of a contested Democratic race – with a bunch of right-leaning candidates vying for that segment of the GOP vote, sure – anything can happen.”

Graham won 56 percent of the GOP primary vote in a low-turnout election back in June.  According to a new Winthrop University poll, he is currently drawing 46.3 percent support in his general election race against Democrat Brad Hutto (28 percent), independent Thomas Ravenel (8 percent) and Libertarian Victor Kocher (4.2 percent).

At last count, Graham had $8 million in his special interest-fed campaign war chest – which he has yet to tap into substantively during his general election.

“He is the firewall,” the operative said, referring to the GOP establishment’s need to keep a reformer from capturing the “First in the South” primary.

@fitsnews I've been wondering what that was all about. Makes sense. Dammit.

Leon Panetta: Barack Obama Has “Given Up”

Lindsey Graham Is Running For President?