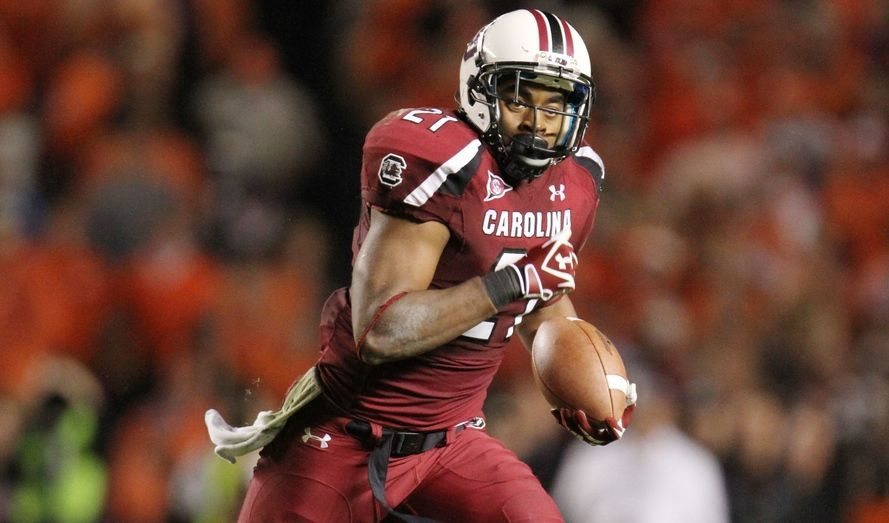 NECK INJURY FORCES FORMER GAMECOCK STANDOUT TO GIVE UP FOOTBALL

Former University of South Carolina standout DeVonte Holloman has been advised to end his professional football career in the wake of a neck injury sustained during a preseason game.

Holloman, 23, played in nine games for the Cowboys in 2013 – recording 26 tackles and two sacks.  He was listed as the teams No. 2 strong side linebacker heading into the 2014 season.  The 6-foot-2, 242-pound linebacker missed seven games last season with a “spinal contusion,” although it’s not clear whether his latest injury – suffered during the Cowboys’ second preseason game against the Baltimore Ravens – was related.

“He was going for a tackle and one of his teammates made contact with him underneath his arm,” reporter Brandon George of The Dallas Morning News noted. “Holloman slammed his right fist in the turf after the injury.”

Selected by the Cowboys in the sixth round of the 2013 draft, Holloman – a Charlotte, N.C. native – made numerous big plays during his career as a Gamecock.  Against Clemson, Holloman recorded three interceptions in four victories over the Tigers.  He also had a big interception in the Gamecocks’ beatdown of No. 5 Georgia in 2012 – and forced a fumble in USC’s 2013 Outback Bowl win over Michigan.

Yeah … dude was a baller.

Our thoughts and prayers go out to Holloman and his family. We wish him nothing but the best …

So sad. If I remember correctly, he had a big game against Florida, the first year we beat them in the Swamp.

Best wishes for the future. I am sure he can now use his degree from USC to move forward in his career.

What? I thought the whole Rock Hill contingency which is who? Gilmore Hollorman and Clowny all got legit degrees before they moved on like any smart scholarship player going to the pros does…… I guess you’re right Squishy I guess his next step is going back to school to get that degree unless his desired future is grounds crew member. Being a baller is great until you’re physically unable to do so anymore. That’s when that degree comes in handy. Oh well.

So what you’re saying is that if you’re an NFL prospect, there’s no reason to get say an Accounting, Engineering, Nursing or Business degree? That a worthless degree is just as good since you’re guaranteed a career in football.

Apparently he has a degree in Hotel and Restaurant Management, so look out Golden Corral and Motel 6. Reports are that he will be brought in as a Grad Asst. next week. How does one take the GRE, get the results back, apply and get accepted into graduate school and acquire a Graduate Assistantship all within an afternoon, the same day that classes start at USC? Amazing.

So just because he got a degree in hotel and restaurant management all he can do is work at motel 6? You are really aren’t just the idiot you act like on here, you are a pussy too (as I have said many times) Why couldn’t he get the degree to go to work in the cooperate offices of more upscale chain of restaurants or hotels? He could go into sales for the hotels to host conventions and retreats for associations or weddings, etc…, But because he was a Gamecock football player you have to assume he lowest about the man. Any other person you wouldn’t say that about, and you definitely wouldn’t say it to someone’s face Its things you say like that are why you mom got fucked into the grave by everyone you little bitch!!!

What are the odds of him landing a sales job at a corporate chain? One of the things you have to have is the ability to speak English. I don’t know how many future brides are going to be impressed handing over thousands of dollars to someone who requires an Ebonics to English translator.

Dirtpecker or Tater, it doesn’t really matter, the ghetto English is still there.

Whoa ever said he gets that position right away? He would work his way up like anyone else fresh out of college. Again you missed the point where you are a coward too scared to ever day that stuff to someone’s face. I’ll meet you to talk as I have offered many times. We can talk about that night 17 years ago when I did your mom up her ass. Keep chirping like the chicken shit you really are. I, and obviously many others on here, do too

Using my phone so oops on the typos

We just thought you were typing one handed.

you mom knew it would take both hands for me to play with it. I used to gag her with just the tip.

Now that life is over for Holloman, I hope he’s been put on suicide watch, we know how those former Dirtpeckers love to deep throat gun barrels.

Just as much as your mom got cancer for getting nailed up her ass. It was so good and tight.

But you can always ass bang female members of Squishy’s family. Your mom was the best until she just couldn’t do it anymore.

You got nothing for me bitch and you know it. Now go tell your girl to clean herself up.

So who’s going to be the next dirtpecker to splatter his brains on the ceiling of a fleabag motel room?

Your dad? I mean the tightest ass around has been gone too long and he has you for a son. You are so desperately trying to act like I don’t own you there you bitch. But keep trying little man

What has been the preferred caliber and round for all of the dirtpecker suicides? If I were to do it I’d go with a 12-gauge shotgun to make sure it was done right the first time (whole head comes off), but I suspect some of these dirtpeckers go with the standard skreet thug .25 caliber pistol where the bullet barely has enough power to make it through the skull… I guess it’s less messy that way.

Or if they are afraid of guns, they could just find a buddy to run over their head… which is how dirtpecker fans prefer to do it. Brain skips across the pavement like a flat rock on a still pond.

It seems they must do it due to the stank you moms asshole left on their cocks.
Damn bitch you are really reaching, and I can just see how worked up you are getting. You are owned and you know it. LMAO. Thanks for playing (even though long ago you promised you wouldn’t reply to me ever, yet here you are all worked up!!!) LOL!!! My little bitch boy. Like father like son huh?

He did earn one and I have one too. I probably do a lot better professionally than you as well. You sound like a jealous child with a screen name trying to claim you have a large penis. Keep that childish crap on one of those dating sites for fat lonely men (just like yourself). Maybe you can jerk off to someone just like you but at least he is claiming to be a 22 year old former cheerleader. It’s as close to a real woman as you might get to meet. We are all sure you know those sites all too well peewee. What did you do for kicks at Clemson? Tip cows in your own way?

Yeah, because responses such as yours class this place up so much.

that are still of much higher class than any of the bullshit you say on here. Tell Mrs.squishy I said hey, and I hope she is finally able to walk again

Pay no mind to Squishy or Norma. Unobjective Clemson hacks, and in Squishy’s case, a hateful bigot with no regard for human life.

“Pay no attention to the man behind the curtain!!!”

How did he retire from the NFL, apply for the GRE, take the GRE, get the results from the GRE, apply to USC, get accepted into a graduate program, and obtain a graduate assistantship with the football team all within an afternoon?

And what degree did Smoking Sammy Potkins get? Did the kid even take a test? If you ever heard him speak he most likely didn’t really pass it.

Sammy got a 14.4 million CASH dishing bonus! Degree not required.

That is sad.
I hope USC can find some kind of coaching job for him. Such a good talent cut short.

USC is going to have a lot of former player coaches if Dirtpecker fans get their wish, they just have to finish their degrees first.

Don’t know the guy, but, you’re probably right. It happens all the time in college football, no university is exempt. You can’t hire all of the wash outs. Just hoping he doesn’t have to work at the zippy mart and you and I have to support him.

DeVonte was underrated here. Not unappreciated. but if other guys, like Gilmore, had not come, he would have been a star.

In 2009, during the first game of our streak against Clemson, he made a game-changing interception that completely turned the game around in USC’s favor. I will always remember him fondly for that. He also had another key interception against Clemson in 2011.

Welcome to the NFL, where you’re nothing more than a piece of meat. If you aren’t prime, you’re shown the door and no fuck is given by the front office.

DeVonte………… if you read this, your well being is more important than a football. I know it gives you no real comfort at this time…BUT…..BUT……..this is a prime moment of possibilities. Sit back and take comfort in the friends that will be “around” you now. Listen…..OBSERVE…..and reflect on every experience you have gone through in your life. YOU KNOW WHAT IT TAKES TO….succeed…!!! How many fellow football players you have had the experience to play with can say that…!?

Dare to wonder just how many highschool football players across our state or region need a mentor..!? With the coming changes of getting paid to play high school and college ball………your experience will be in a prime position..!

Very well said. We’re all thinking of you in my house, DeVonte!