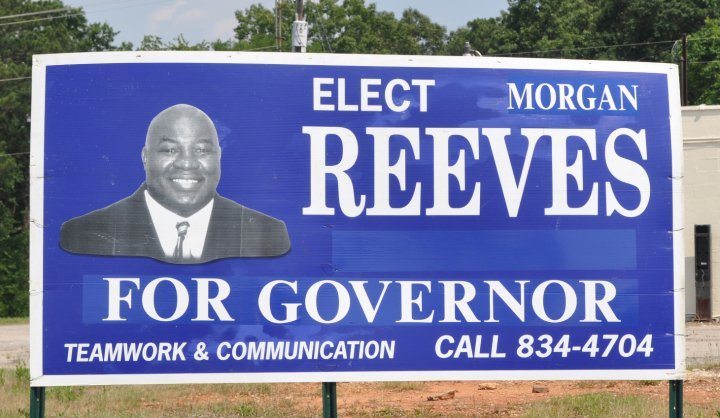 We received a letter recently from a reader informing us that our coverage of the 2014 South Carolina gubernatorial race has been lacking … and guess what: They were right.

Apparently we’ve been neglecting to mention one of the candidates on the ballot: United Citizens Party nominee Morgan Bruce Reeves.

Who is Morgan Bruce Reeves?  Well, he’s not  a former National Football Player – something he claimed to be during his 2010 campaign for governor (in which he appeared on the ballot twice, garnering 1.5 percent of the vote).

Nor is he a Pharaoh, although he told The (Columbia, S.C.) State  newspaper four years ago that if he was elected “it will be like building the pyramids of Egypt, and I’ll be pharaoh.”

Reeves appearance on the 2014 ballot is likely to work in incumbent “Republican” Gov. Nikki Haley‘s favor – even if he only receives one percent of the vote (or less).  In fact the reader who called our attention to Reeves’ candidacy surmised we were ignoring him precisely because  he might wind up helping Haley.

And also because we were ostensibly “trying to hold the black man down.”

The truth is, until receiving confirmation from the S.C. Election Commission (SCEC) this week, we had no idea Reeves was on the ballot.  Now that we do, we will give his bid the obligatory mention in all future coverage.  Not only that, we will extend to Reeves’ an invitation to submit his policy positions as well as his criticism of the positions advanced by his opponents – Haley, Democrat Vincent Sheheen, independent Tom Ervin and Libertarian Steve French.

Of note, Reeves is listed only once on the ballot this year – as the United Citizens Party nominee.  In 2010, his name was listed twice – as the UCP and Green Party nominee.

This dumbass used to (maybe still does) roll around cola pretending to be a major grading contractor. Truth of the matter was he didn’t have enough credit to rent a small dozer or excavator, or have any idea how to run one.

“…Reeves appearance on the 2014 ballot is likely to work in incumbent “Republican” Gov. Nikki Haley‘s favor…”
As is Ervin and Ravenel’s.

Man, that sign has been through some stuff. Should we at least congratulate him on his recycling efforts?

Well, he did put it right side up….

What is his area code?

He obviously thinks we have only one.

Has anyone seen Morgan Bruce Reeves and Alvin Greene in the same place? Just sayin’…