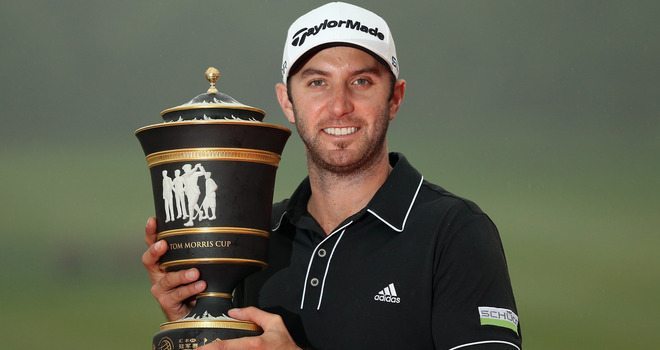 Around this time a year ago we were wishing professional golfer Dustin Johnson the best as he announced his engagement to Paulina Gretzky, daughter of National Hockey League legend Wayne Gretzky.

Johnson – a native of Columbia, S.C. and graduate of Coastal Carolina University – seemed to have it all going for him.

This summer?  The thirty-year-old is struggling. Earlier this week, Johnson announced he is taking a leave of absence from the remainder of the 2014 PGA tour to deal with “personal challenges.”  According to Golf.com Johnson didn’t take a leave, though, he was suspended for six months after testing positive for cocaine.

The publication also reported that Johnson had failed two previous drug tests – one for marijuana in 2009 and one for cocaine in 2012.  It also alleged that he “had a sexual indiscretion with at least one wife of a PGA Tour player.”

Not a huge secret either that #DustinJohnson had affairs with 2 wives of PGA Tour players. One broke up the marriage.

Without commenting on the drug or infidelity rumors, the PGA shot down the suspension report.

“With regard to media reports that Dustin Johnson has been suspended by the PGA Tour, this is to clarify that Mr. Johnson has taken a voluntary leave of absence and is not under a suspension from the PGA Tour,” a statement from the organization read.

Johnson missed two-and-a-half months in 2012 – ostensibly due to injuries sustained in a jet ski-related incident.  According to Golf.com, though, Johnson was suspended in 2012 due to a failed drug test.

In 2009 – the year he allegedly failed his first PGA drug test – Johnson was arrested for driving under the influence in Myrtle Beach, S.C.

“Rest assured, I will definitely learn from my mistake,” Johnson said at the time.

This year he was playing exceedingly well, earning seven top ten finishes and earning $4.2 million.  As a result of his leave of absence, he will miss the 2014 PGA Championship, FedEx Cup playoff series and Ryder Cup.

Johnson is one of the longest drivers on the tour.  In fact he hit a ball 405 yards earlier this year at the British Open – where he finished second in 2011 (his best-ever finish at a major tournament). He’s currently the No. 16 golfer in the world, according to the official world golf rankings.

That may be why his top sponsor, TaylorMade, said it was sticking with him.

“We wish him well and look forward to his return,” the company said.

“I will use this time to seek professional help for personal challenges I have faced,” Johnson said in his statement. “By committing the time and resources necessary to improve my mental health, physical well-being and emotional foundation, I am confident that I will be better equipped to fulfill my potential and become a consistent champion.”

@fitsnews He's throwin' it all away. I hope he gets it back together before he becomes the next John "What Could Have Been" Daly.