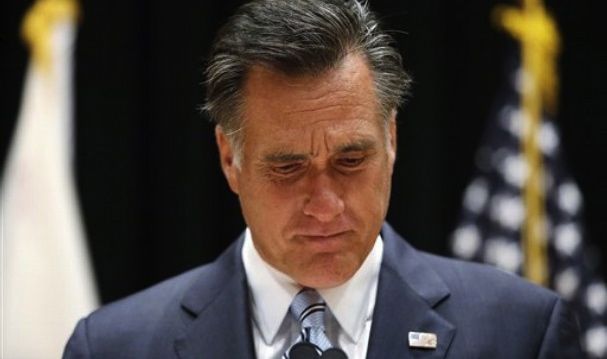 THE GOP’S “ESTABLISHMENT MAN” IS BACK …

Mitt Romney is the crown prince of establishment “Republicanism.” The sultan of status quo. The great Mormon middler. Yet as we meticulously documented and repeatedly proclaimed during the last presidential election, he is everything the GOP should be eschewing … not embracing.

“Republicans” told us Mitt Romney was electable … but we didn’t fall for that. And it turned out we were right.

Seriously … how was a guy who was “for Obamacare before Obama was” ever going to provide a compelling alternative to the Democratic ticket?

Anyway, Romney is back … trumpeting the success of a trio of establishment U.S. Congressional candidates who sought and received his endorsement en route to victories over “Tea Party candidates.” We’re referring to incumbent U.S. Reps. Mike Simpson (Idaho) and Bill Shuster (Pennsylvania) and congressional candidate Monica Wehby in Oregon.

Those victories come on the heels of another establishment GOP win in North Carolina’s contested primary for the U.S. Senate.

“In all these cases … [the candidates] each very much wanted Gov. Romney’s support and endorsement,” a Romney communications advisor told BuzzFeed’s McKay Coppins. “He continues to be a very powerful voice for the party. He is one of the few individuals who can help Republicans define their message and unite behind candidates that can win general elections.”

Another Romney confidante told Coppins that Romney’s candidates were winning because “Republicans are sick of losing.”

Here’s the thing, though: By nominating candidates who have no allegiance (or limited allegiance) to the pro-freedom, pro-free market ideologies the GOP is supposed to stand for, “Republicans” alienate voters who place a premium on those ideologies.

Take early-voting South Carolina, for example … incumbent U.S. Sen. Lindsey Graham could very will win the GOP nomination on the first ballot, but he faces an uncertain future in the general election because of his repeated betrayals of voters’ liberties and their bank accounts.

And even if he does manage to win, what’s the point?  In the vast majority of cases, Graham and most of his “Republican” colleagues in Washington are different from Democrats only insofar as their rhetoric during campaign season …

Neither party is serious about your bottom line … or your most basic freedoms.

Don’t believe us? Elect a bunch of “Romney Republicans” in 2014 and see what you get … because our bet is it will be more of the same.