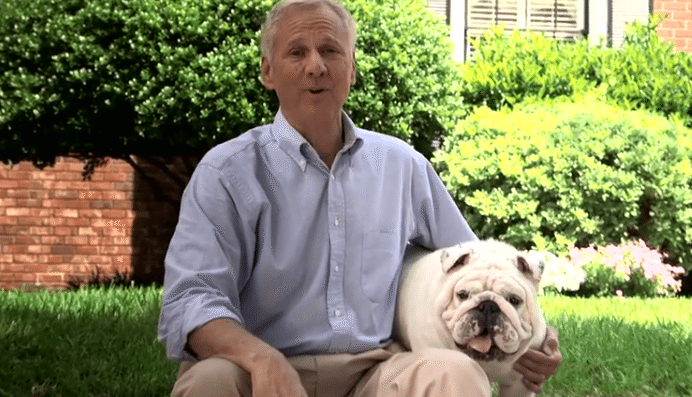 This website has had plenty of fun at the expense of Henry McMaster – the former S.C. Attorney General/ “Republican” Party chairman currently running for lieutenant governor of the Palmetto State.

Seriously … he’s Foghorn Leghorn (only without the feathers). Oh, there are also gardening implements in your tool shed or garage with higher intelligence quotients.

Rather than try to be something he’s not, though, McMaster is embracing his kinship with the common man in his most recent television commercials – with a little help from his Bulldog, “Boots.”

“He’s our family watchdog,” McMaster says of the dog, “and I’m proud of my record as South Carolina’s watchdog.”

Cheesy? Absolutely. Unbearably so, even.

Effective? Take a look for yourself …

Nice growl from the dog, huh?

McMaster’s “Bulldog” ad is ridiculous and brilliant – delivering gimmicky, largely substance-free fun for the whole (voting age) family. And while professional political cynics like us dip into our inkwells to mock the spot (or figure out a way to get a canine on the ballot), most South Carolina “Republican” voters are lapping up the pablum … and most importantly, remembering McMaster’s message.

The spot is a helluva lot better than the poorly conceived, poorly delivered pitch offered by Nikki Haley’s lieutenant gubernatorial candidate, Pat McKinney – the wealthy Lowcountry developer who has emerged as McMaster’s main rival for this largely ceremonial office.

That ad was forgettably bad …

We don’t really give a Bulldog’s backside who wins the GOP lieutenant gubernatorial nomination (frankly we’ve been most impressed by the Democratic nominee, S.C. Rep. Bakari Sellers), but McMaster’s ad certainly makes an impression.

And before you criticize the impression it makes, remember … this is South Carolina.