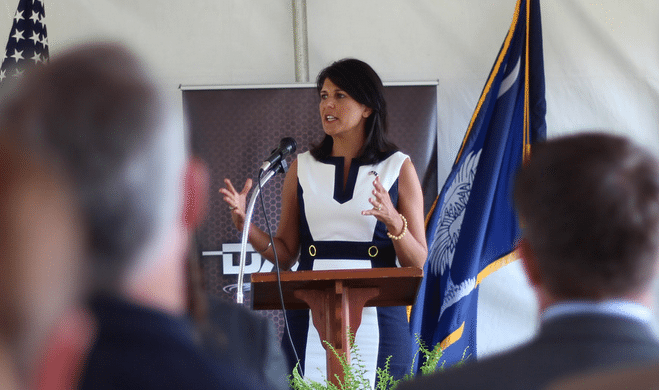 DO AS SHE SAYS … NOT AS SHE’S DONE

S.C. Gov. Nikki Haley is an ethics reform hypocrite – something this website has been exposing for the better part of the last four years. When Haley introduced her ethics reform agenda in 2012, for example, we had to laugh: She proposed doing away with many of the loopholes she has habitually exploited over the years in order to maintain and expand her political power.

Haley proposed income disclosure for lawmakers – even though she failed to disclose more than $40,000 she received from a company doing business before the state. She proposed consolidating ethics cases under an independent agency – even though she relied on a corrupt committee of her former peers to evade conviction on a wide range of public corruption charges. She pushed for mandatory recusals from office – even though she failed to recuse herself from votes benefiting her secret employer. She demanded reforms to the state’s Freedom of Information Act (FOIA) – even though her administration illegally deleted emails and deliberately withheld public information from reporters. And she asked lawmakers to correct a flawed election law that resulted in hundreds of candidates being booted from the 2012 ballot – even though she co-authored the statute with her longtime ally, S.C. Rep. Nathan Ballentine.

“We can’t point to a single one of Haley’s ethics proposals that she hasn’t already either violated or exploited in an effort to cover up her offenses,” we wrote at the time.

Anyway, last week Haley’s office – which obviously hasn’t been an effective advocate for ethics reform – took its hypocrisy to a new level when it rejected a proposed “compromise” ethics bill put forward by members of the S.C. House of Representatives.

Such a panel would be a step in the right direction, in our opinion, but Haley was having none of it.

“There is nothing independent about legislators investigating other legislators,” Haley’s office said in a statement.

That’s correct …. but let’s rewind the tape on that, shall we?

“That’s the exact process Haley used to get herself off after illegally lobbying for Lexington Medical Center while serving in the State House,” a statement from the S.C. Democratic Party read.

Indeed it was … it’s also the exact process cited by Haley today as a justification for her illegal lobbying activities.

“All The Speaker’s Men”