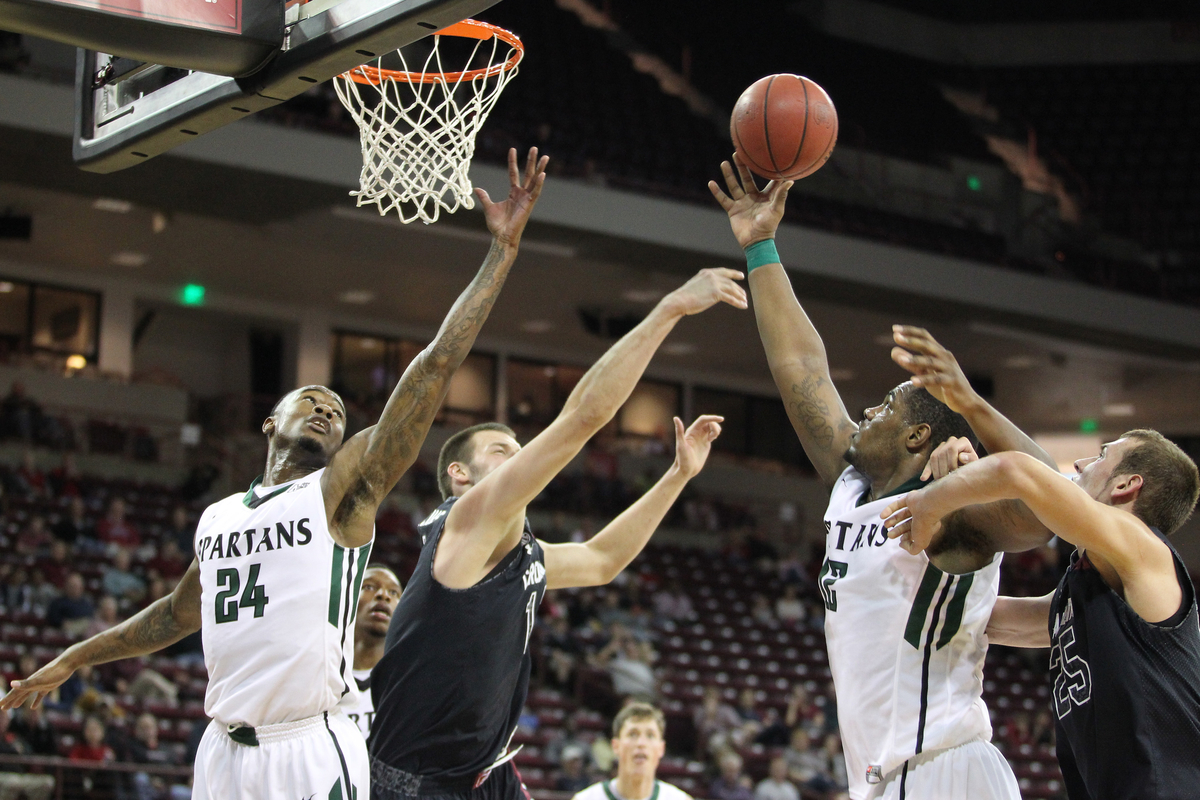 COLUMBIA, S.C. – Holding a three-point lead at the half, South Carolina was unable to keep up with USC Upstate’s shooting from the field in the second half (48.1 percent) as the Gamecocks fell 74-68 today at Colonial Life Arena.

Freshman Sindarius Thornwell led South Carolina with 19 points and seven rebounds, and junior Tyrone Johnson chipped in 11 points, but the Spartan offense was keyed by Ricardo Glenn who had a season-high 22 points and 14 rebounds to go along with three others who scored in double figures for USC Upstate.

The Gamecocks (2-5) grabbed an early 4-0 lead after senior guard Bruce Ellington found Johnson cutting to the basket, but the Spartans (6-5) quickly tied the game up, scoring on consecutive possessions before senior forward Torrey Craig the road team a one-point advantage from the line.

Carolina responded with a 10-1 run ignited by back-to-back 3’s from Thornwell and Duane Notice in less than three minutes. Sophomore forward Liamonas Chatkevicius capped off the run by tipping in a missed attempt from 3 from Brenton Williams.

After a lay-up from Glenn cut the Gamecocks advantage to 24-14 with seven minutes remaining, Williams pushed the lead back 13 with his first 3-pointer of the game. Less than a minute later, Notice turned over Jodd Maxey and quickly found Williams open on the break on the right side for another 3 to extend the run to 8-2 and push the lead to 32-16.

Out of the break, Ellington scored his first points of the game on a 3-pointer to push the home side’s lead to seven.

With 14 minutes to play on a fast break, the Spartans looked to cut the Gamecocks advantage to one, but Desmond Ringer tracked back and blocked the lay-up attempt. The rebound was passed ahead to Williams who cut into the lane and found Mindaugas Kacinas under the basket to give them a 45-40 lead.

With under 12 minutes remaining, Williams lost the handle on the ball during a drive into the lane that led to Ty Greene finding Fred Miller on the break for two of his 10 points to cut the Gamecocks lead to 45-44. The Spartans grabbed their first lead since the early going as Miller found ShunQuez Stephens cutting to the basket on the next possession.

Up by one at 52-51 with just over seven minutes to play, Carolina saw the Spartans hit a 10-2 run which Craig capped by dunking a missed 3-point attempt from Greene to push the road team’s lead to seven.

Ellington began to push the tempo, hitting a jumper at the opposite end before driving to the basket on the next possession after a steal from Kacinas. The senior’s lay-up was off the mark, but Demetrius Henry was there to clean up the miss on a dunk to bring to the Gamecocks within three at 61-58 with less than four minutes remaining.

After a Glenn hit one of two from the line as Henry picked up his fifth foul of the game, Carolina pulled within two as Johnson found Ellington at the top of the key for his second 3-pointer of the day. The Spartans though quickly responded Glenn found Greene in the corner for three of his 10 points.

Down three, Johnson drove to the basket and forced a foul on the Spartans, but the ball wouldn’t drop for the junior. He converted on the pair, but Miller converted on a three-point play on the other end to extend the Spartans’ lead to 69-65 with 37 seconds. Thornwell missed a 3-point attempt on the Gamecocks following possession.

The Gamecocks will head to Honolulu, Hawaii tomorrow ahead of the Hawaiian Airlines Diamond Head Classic where they will play three games in four days, ending on Christmas Day. Carolina will face St. Mary’s in its first game of the tournament on Sunday. Tip-off is slated for 11 p.m. ET and will air live on ESPNU.