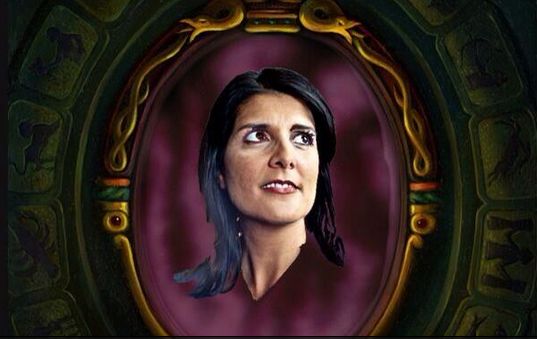 “Mirror, Mirror on the wall – who is the most unethical of them all?” the Democratic ad asks.

The spot is accompanied by a letter to Haley from South Carolinians who say they “won’t stand for her ethics violations.”

Haley has made ethics reform her top priority heading into the 2014 session of the S.C. General Assembly.

Those are admirable objectives, to be sure … although most agree the watered-down legislation endorsed by Haley is wholly inadequate to the task at hand. Most importantly, Haley’s legislation fails to address the selective enforcement and “self-policing” of the Palmetto State’s elected officials that lies at the heart of the problem.

Seriously … until politicians are prohibited from acting as their own judges and jurors on ethics complaints, we will never see anyone held accountable for anything in this state.

Then there’s the issue of Haley’s hypocrisy on this issue (which is ongoing).

South Carolina is one of the most corrupt, secretive state governments in America – a tradition Haley has continued (and expanded upon) despite her promise to run the “most transparent administration” in state history.