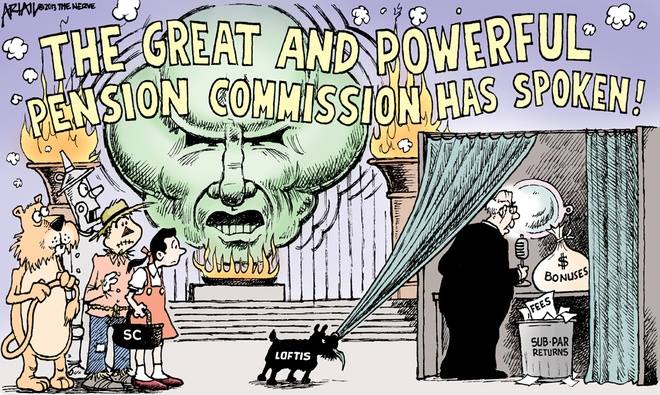 Every since he got out from under the thumb of the big government-loving liberals at The (Columbia, S.C.) State newspaper, political cartoonist Robert Ariail has been doing some great work on behalf of reformers in the Palmetto State.

For example this cartoon – which depicts the shameful corruption and incompetence demonstrated by Reynolds Williams and other leaders of South Carolina’s $25 billion pension fund (a.k.a. Retirement System Investment Commission).

These buffoons pay out the highest fees in the nation – as well as exorbitant bonuses to the numbskulls who dole out those exorbitant fees – yet the Palmetto State’s fund continually produces some of the worst returns in the entire country.

Props to Ariail for hitting the nail on the head …

Now if only S.C. Gov. Nikki Haley (whose appointee to this board has been a big part of the problem) and leaders in the S.C. General Assembly would support efforts by S.C. Treasurer Curtis Loftis to hold the leaders of this fund accountable.

You know … as opposed to fighting those efforts.

SC Politicians Are For Sale? No Way!