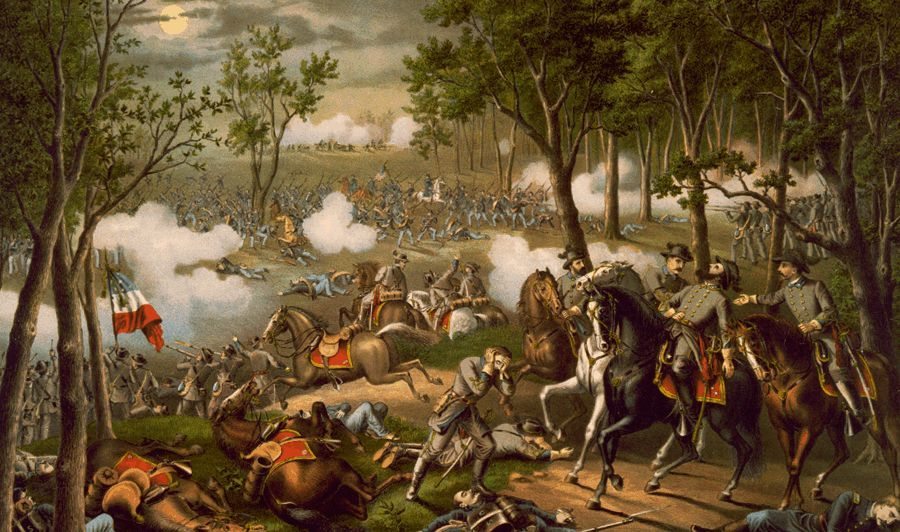 The greatest Southern victory during the “War of Northern Aggression” (relax … we’re just having some fun) took place from April 30 to May 6 in Spotsylvania County, Virginia – near the village of Chancellorsville.

In the face of a superior enemy (General Joseph Hooker’s 133,000-strong Army of the Potomac), Confederate General Robert E. Lee – in command of the 66,000 troops of the Army of Northern Virginia – did the unthinkable.

Lee divided his forces on several occasions – including sending his best lieutenant (General Stonewall Jackson) and 28,000 of his men on a suicidal 12-mile march through the wilderness with the intention of rolling up Hooker’s right flank. The gamble – one of the most daring and desperate in the history of modern warfare – worked.

Hooker’s forces were caught completely by surprise by Jackson’s men – and the Confederate rout was on.

Outnumbered by more than a 2-to-1 margin, Lee’s forces had nonetheless routed their opponent (although it cost them dearly as Jackson sustained a mortal injury from friendly fire during the battle).

We’ve been thinking a lot of Chancellorsville as it relates to the divided Republican Party.

In fact we think it’s a perfect metaphor … albeit with a twist.

Imagine for a moment that an outnumbered, outgunned party divided its forces in front of a superior foe. Okay … you don’t have to imagine such a scenario because that’s exactly what the “Republican” Party has done in the face of Barack Obama and his Democratic allies in the U.S. Congress. Now imagine that the larger portion of that “Republican” army decided to turn and fire into its own ranks rather than fire against the enemy.

And that … in a nutshell … is what’s happening in Washington, D.C. right now. In fact the traitors were already massing long before the so-called “government shutdown” battle even began.

It is always risky (permissible, but risky) to divide one’s forces in the face of a more powerful army. But successfully pulling off such a feat requires strategic initiative, innovating planning, precise coordination … and bravery. Most importantly, it requires everyone singing off of the same sheet of music.

Instead, more than half of the “Republican” army – including all of its top generals – are fighting for the enemy.

We know, we know … “large Southern website invokes Confederate analogy in attacking black president.” Please. This isn’t about that, it’s about one simple thing: Money. An incredibly large pile of money ($300-600 trillion, to be precise).

Money that’s about to disappear …

Latest GOP Debt Deal: How Much Does It Cost?