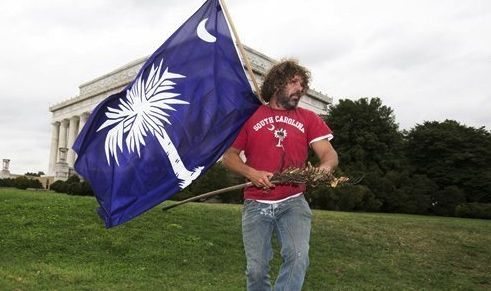 Yesterday he was some random “Grizzly Adams dude” mowing the grass at the Lincoln Memorial during the federal government shutdown – or whatever it is we’re calling it when 83 percent something keeps on keeping on.

Today? He is Mount Pleasant, S.C. native Chris Cox – the long-overdue poster boy for a nation that desperately needs to get up off of its ass.

Cox’s decision to assume responsibility for lawn maintenance outside the Lincoln Memorial during the so-called “#Shutdown” quickly became a viral sensation.

He says he’s just doing his job for ‘Merica, protecting its most sacred spots from “vandals” and “whackos.”

“Here in America, we haven’t shut down. Not even close. This is how free people take care of their country,” the website Charleston Grit noted. “Will there will be plenty saying this guy – full beard and a landscaping habit that won’t quit – is the wacko? Sure as death and taxes. But at Grit, we take this route: Hundreds of full-grown, well-dressed, well-educated men and women are name-calling and scheming and playing cat-and-mouse with our public parks, monuments, and memorials (you know, like back when the neighborhood kids did when they built a fort… and we were seven). But we haven’t shut down. Go ahead, get ‘er done, Charleston.”

Anyway here’s Cox in his own words (via the YouTube page of U.S. Rep. Darrell Issa of California) …

Koch Brothers Bail On Their Own Movement