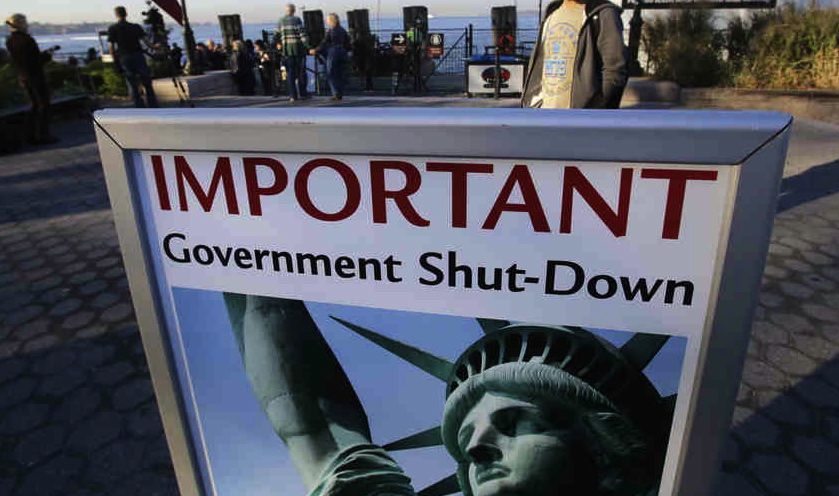 The federal government didn’t shut down last week. In fact no matter how you slice the numbers, huge percentages of it remain open for business – proof that you can’t stop the taxpayer-funded gravy train.

We’ve touched on the specific dimensions of this partial shutdown in previous posts, but the more we learn – the milder this “shutdown” gets. Especially now that an estimated 400,000 of the 800,000 civilian employees of the U.S. Department of Defense are back on the job (as of October 7).

Seriously … that was roughly half of the estimated 800,000 furloughed employees (out of a total of 4.1 million full-time and part-time employees of the federal government).

Meanwhile there are the dollar amounts associated with the work stoppage. Correspondent Byron York of The Washington Examiner asked a GOP source on the U.S. Senate budget committee “how much of the federal government’s total spending is still underway even though the government is technically shut down.”

“Eighty-three percent of government operations will continue,” York was told. “This figure assumes that the government pays amounts due on appropriations obligated before the shutdown ($512 billion), spends $225 billion on exempted military and civilian personnel, pays entitlement benefits for those found eligible before the shutdown (about $2 trillion), and pays interest costs when due ($237 billion). This is about 83 percent of projected 2014 spending of $3.6 trillion.”

Oh, and for those of you educated in a government-run school in South Carolina, that leaves only approximately 17 percent of government unfunded.

Yea, I picked this up the other day. MSM was originally crowing about a 25% shutdown…now it’s 17%.

Hell, the gov’t can even shut itself down properly…lol…it’s hopeless.

Look up tea bag, I bet they can successfully default on the debt.

Weren’t you the guy bitching on the other story about wanting gov’t to do something for you?

Here’s an idea for you, do something for yourself and stop whining like a douche-bag.

Gov’t isn’t coming to save your day anytime soon.

I would hope that even the most enthusiastic Obama supporters would be troubled by a government so powerful that 83% of its operations cannot really be shut down. Or that actively wages war on its citizens (e.g. WWII vets) to teach them a lesson for daring to slow down the rate at which Leviathan is fed.

Look out everybody! Will Folks is butthurt over getting what he wants!

If we got rid of all discretionary spending, burned Washington to the ground and privatized the military he’d still complain that we didn’t have time machines to go back eradicate all of that social spending that mocks and insults us from the safety of the past. He is as rational and compromising as Skynet.

Out of pure spite I’m this close to hoping we default and I didn’t even support ACA. I guess that is the mark of a good troll.

Focusing on the percent of employees on the job is perhaps not as telling as the fact that hundreds of thousands of workers are currently working w/o receiving pay. Yes, they will likely get it when the shut down ends, but who among us wants to or is willing to work under these circumstances. Most mortgage and car loan banks won’t take a “my employer is too dysfunctional to pay me right now” excuse note.

The only reason the workers will not jump ship is because they believe, hopefully correctly, that the US government doesn’t default on its debts. However, Republicans are salivating at the opportunity to disabuse employees, creditors, other nations, the public and anyone else of the notion that the USA of will pay its debts. GOP, GOP, GOP! Thanks you idiots, you’ve given the public something to hate more than Obamacare, you deserve a pat on the back!

Republicans have been passing bills in the US House funding different parts of the government that is shut down for one, they were too busy to be out killing babies or whatever nonsense you seem to think they were up to. For another various banks will give deferments to people affected by this “shutdown” (my wife’s credit union does it and they are not the only one). For third, even the people sent home without pay will get back pay for sitting at home watching all this unravel on TV.

As someone who has worked for employer’s who were withholding pay trying to get back in the black, I can assure you many major credit institutions do NOT go out of there way to forgo fees, and penalties for any reason.

Nice, someon finaly brings up abortion, which is a quintessntially part of any debt debate….

Calm down, that was no reference to abortion. I was making a facetious statement about how Democrats want everyone to think Republicans are more interested in harming their fellow man than helping make things better for all.

DO NOT SHUT THE GOVERNMENT DOWN! THIS DEPENDS ON MY COLLEGE AND EDUCATION FOR MY FUTURE AND YOUR CHILDREN S’ FUTURE!!!