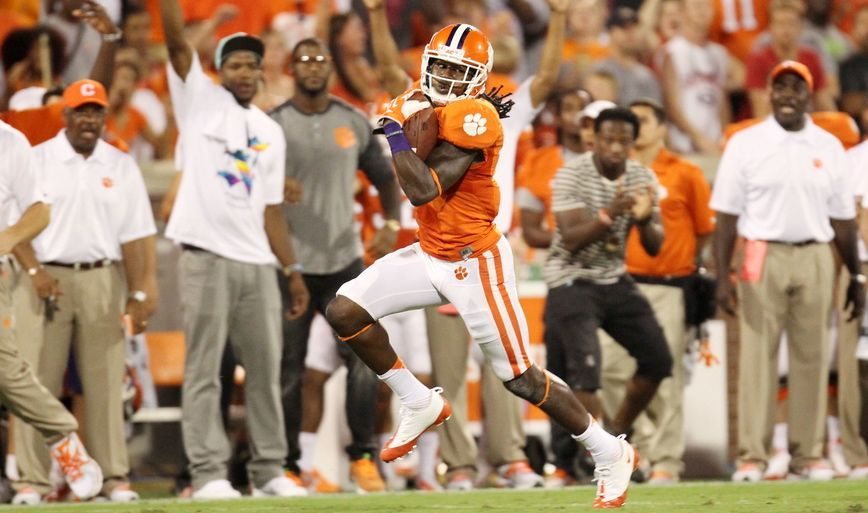 Last December our occasional columnist Brant Branham laid out the challenge facing the Clemson University football program at the close of the 2012 regular season.

“After absorbing a fourth straight loss to arch rival and up-and-coming SEC power South Carolina – Clemson’s next two games come against perennial SEC bullies LSU and Georgia,” Branham wrote. “If you’re coach (Dabo) Swinney and the fourteenth-ranked Tigers – what more could you ask for?”

Indeed … and what more could Clemson do to answer the challenge? The Tigers defeated LSU in last year’s Chick-fil-A Bowl … and then defeated Georgia in their 2013 season opener. They also won a defensive-minded game on the road last Thursday against North Carolina State – which dealt then-No. 7 Clemson a stunning upset the last time the Tigers ventured into Carter-Finley Stadium in Raleigh, N.C.

Some view the Tigers 26-14 win over the Wolfpack as lucky (ahem, this play). Others say the narrower-than-expected margin of victory shows the Tigers don’t deserve their lofty No. 3 national ranking.

Still others see Clemson’s win over N.C. State as evidence of a multi-dimensionality (take your time with that word, Tiger fans) the program has lacked in recent years.

“Clemson is not all about tons of points and offensive gimmicks. In fact, the Tigers are not yet producing at the same levels offensively as they have the last two years,” writes ESPN’s Andrea Adelson. “Where they have made strides this season is on defense. That group allowed Clemson to win the NC State game. Again, that is something that may not have been said about this team two years ago.”

Ya think? Hmmmm … we wonder why.

“If Clemson continues to pair a strong defense with its already strong offense, perhaps all the misconceptions will crumble once and for all,” Adelson concludes.

That’s accurate. If the Tigers’ defense – bolstered by several years of exceptionally strong recruiting classes – continues to progress at its current pace, then Clemson will be a legitimate national championship contender.

The stakes couldn’t be higher. The Florida State game might as well be for the ACC championship, while the South Carolina game could determine whether the Tigers get a shot to play for the national title.

Having passed two major tests (LSU and Georgia), Clemson must now pass two more if it wants a chance to bring home the school’s first national title in 32 years.