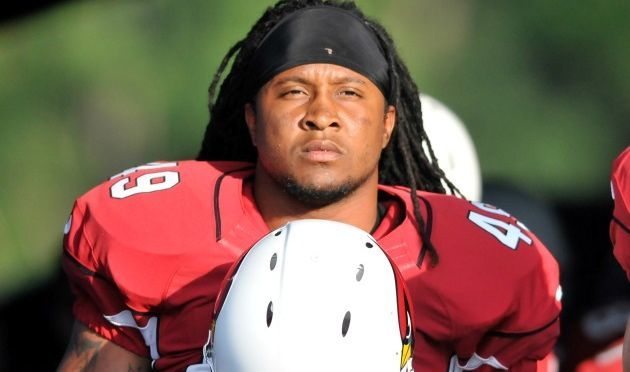 Rashard Johnson is a fifth-year defensive back and special teams player for the Arizona Cardinals. He was selected in the third round of the 2009 NFL draft and has started in seventeen games for the Cardinals – registering nearly 150 total tackles.

A walk-on running back at the University of Alabama, he switched to defense and become a two-year starter for Nick Saban’s Crimson Tide – serving as team captain his junior and season seasons.

Why are we telling you about Johnson? Because he is one tough hombre …

During this weekend’s 31-7 loss to the New Orleans Saints, Johnson (wearing No. 26) lost the tip of his left middle finger while attempting to tackle Saints’ punt returner Darren Sproles shortly before halftime.

Wow … we knew pro football was fast but we had no idea it was “take your finger off” fast.

Johnson proceeded to play the rest of the game without recognizing the seriousness of his injury. In fact it wasn’t until he took his glove off in the locker room that he realized how bad it really was.

What gave it away?

When he removed his glove, the tip of his finger was still inside it …

Johnson underwent surgery Sunday evening – with doctors shaving down his exposed bone in an effort to prevent infection.

“Most painful injury I’ve ever had,” Johnson tweeted.

We don’t doubt it … anyway, props to Johnson for toughing it out. We hope he won’t be forced to miss too much time with his injury.