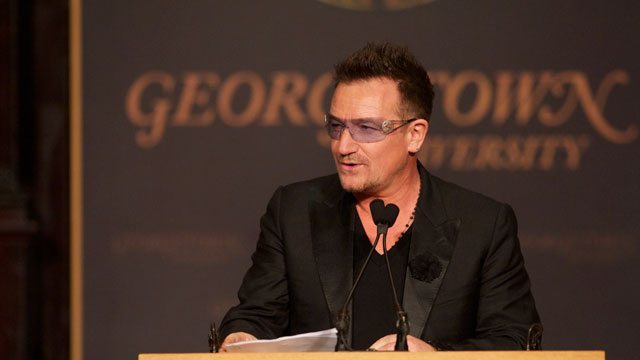 We’ve had the privilege of seeing U2 live in concert on several occasions, most recently when the band swung through the American Southland on its 360 tour three years ago (concert review here).

Our founding editor grew up on U2 … and has loved them ever since scooping up the band’s War album on vinyl when he was only nine years old.

And while we haven’t always agreed with U2’s lead singer Bono – he’s been a champion for increasing foreign aid to developing nations (which we oppose) – we have always respected the passion with which he has advanced his beliefs. A lot of U2 fans don’t like Bono’s activism, but whether you agree with him or not – his ONE foundation has emerged as one of the most potent celebrity activist organizations in the world.

And unlike knee-jerk lefties like George Clooney, Bono has emerged as one of the most thoughtful, credible celebrity activists in the world.

“Aid is just a stopgap,” he said. “Commerce (and) entrepreneurial capitalism take more people out of poverty than aid.”

Obviously this is just one remark in one speech – and to our knowledge Bono hasn’t repudiated his longstanding support for foreign aid. But this underlying acknowledgment – that market forces, not government intervention, drives economic growth – is a critical recognition on his part. In fact we would argue government intervention – including foreign aid – only makes things worse.

Looking for some statistical evidence to back up that assertion? Check out this excellent column written on the subject last spring by Howard Rich.

Anyway, we’re glad Bono has at least acknowledge this immutable economic reality. Let’s hope it’s the first of many similar steps in his evolution as a thinker.

Lindsay Lohan On “Eastbound And Down”

The Triumph Of ‘Mud’