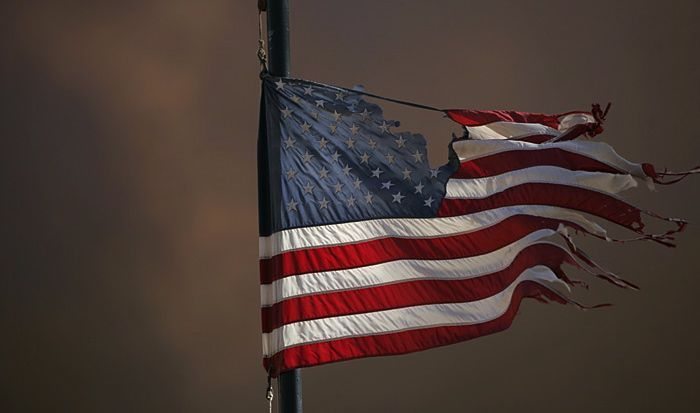 In years past this website has marked the occasion of Memorial Day by reposting the late Ronald Reagan’s famous address – delivered on May 30, 1982 at the Tomb of the Unknown Soldier in Arlington, Virginia.

“I can’t claim to know the words of all the national anthems in the world,” Reagan said in concluding his remarks, “but I don’t know of any other that ends with a question and a challenge as ours does: Does that flag still wave o’er the land of the free and the home of the brave? That is what we must all ask.”

Earlier this month we published an article entitled “Evil Empire” in which we provided a blunt answer to that question, noting the many ways in which “the last, greatest hope for human liberty has become its most formidable foe.”

So … what does this mean for Memorial Day, an occasion which is marked by a near-universal outpouring of admiration for those who “died for our freedom” and “paid a debt we can never repay” and “gave the ultimate sacrifice” (and any of a dozen other cliches being spouted reflexively across American social media today)?

Earlier this year we had a chance to listen to South Carolina’s own Louis Fowler, a World War II veteran who survived a harrowing plane crash and thirteen-month captivity in Nazi-occupied Europe in 1944-45. Fowler specifically recalled a 500-mile death march through occupied Poland and (eventually) the German Fatherland itself, one in which tired, starving stragglers were put down like dogs when they fell behind.

“We lost hundreds of American soldiers that way,” Fowler recalled.

But what did they die for? And more importantly … why have nearly 7,000 Americans died over the last decade in a randomly concluded “War on Terror?”

Obviously Fowler’s comrades-in-arms died freeing Europe from Nazi occupation – battling a foe which previously declared war against the United States and whose leader, Adolf Hitler, had long envisioned a climactic battle against America for world dominion. In fact more than five years prior to taking power in Germany Hitler asserted that one of the goals of his National Socialist movement was to prepare his nation for war with the United States.

Also, aside from the glaring lack of anything resembling a compelling “national interest” associated with these engagements – can the U.S. Armed Forces legitimately claim the moral authority to “fight for our freedom” when the government it represents is fighting a bureaucratic war against our freedom?

“Today is not the day for this discussion,” some say. And maybe they’re right.

Then there’s the ever-popular suggestion, “criticize the government, but respect the individual sacrifice.”

But at this point – how can anyone with an open mind view enlisting in the U.S. Armed Forces – or working for our “Homeland Security” – as “fighting for freedom?” Increasingly in this country, the battle for freedom involves taking a stand against … not with … our government. And in such a battle, the only person who is ever going to care for (let alone fight for) your freedom is you.

The United States of Fat

Allison: Another View On IRS Scandal