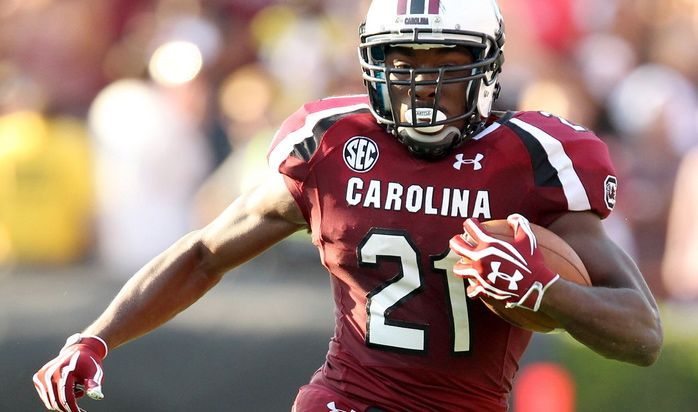 There are a lot of formulaic stories out there about athletes overcoming adversity – stories in which intellectually lazy sportswriters reach for the old cliché about an athlete’s strongest muscle being “their heart.”

In Marcus Lattimore’s case, though, that cliché fits …

He is all heart.

We won’t bore our readers with a lengthy recapitulation of Lattimore’s legend, because being from South Carolina we’ve watched every single chapter unfold – from his smashing arrival against Georgia in 2010 to his record-breaking romp over Florida in ‘The Swamp’ that year to his season-ending 2011 injury to his inspiring 2012 comeback.

And obviously we watched – agonizingly – as he suffered a gruesome season-ending injury last October against the University of Tennessee. And the even more inspiring comeback he is currently undertaking.

Now the legend of Lattimore is being told on the national stage in an article appearing in this week’s editions of The Wall Street Journal.

Lattimore thought his football career was done. Football? He was worried about walking again. He was worried what he’d do for a career. Ligaments were shredded, his knee dislocated.

Lattimore said there was a nervous minute where they worried about nerve damage, about the possibility of losing a leg. He said this casually, as if he was talking about somebody else.

It may as well have been somebody else. Because here is where Lattimore is right now: he is running. He is jumping and squatting and putting pressure on that leg that had been so savagely wrecked. After successful surgery by the famed sports orthopedist James Andrews, Lattimore has spent months upon months rehabilitating that knee. Steps in the pool have given way to moving over land, and a faraway chance has transformed into a focused ambition.

“I just felt it was right for me to never quit,” he said. “Not give up on this.”

God we love this guy … LOVE him.

We have no idea where Lattimore will be taken in this weekend’s NFL draft – if he’s drafted at all (we suspect he’ll wind up being a late round pick).

What do we know, though?

Whichever team winds up taking a chance on him will be rewarded handsomely. If Lattimore is able to return to top form – as he did in 2012 – he’s going to be the steal of the 2013 draft, giving one lucky NFL franchise the equivalent of a marquee first round running back with a late round selection.

Wait … “if Lattimore is able to return to top form?”

Clearly that sentence should have read when Lattimore returns to top form. Because guess what: He’s coming back bigger, stronger, better and faster than before – whether the NFL is ready for him or not.

There’s just no stopping that heart …

Carolina And Clemson: Believe The Hype