Only in a state as corrupt as “Republican-controlled” South Carolina could an “ethics reform” movement – one born of endless scandals – devolve into a major scandal itself.

That’s exactly what’s happening, though, as the Palmetto State’s crooked-as-hell GOP leadership has been caught red-handed trying to secretly decriminalize an entire section of state law dealing with ethics offenses. Not only that – they refused to publicly release their proposed “reform” legislation prior to a pair of public committee hearings held earlier this month.

How transparent of them, right?

Of course that’s par for the course in this state, sadly …

Leading this goat show is new GOP “Majority” Leader Bruce Bannister, who apparently doesn’t like being exposed as the latest in a long line of “Republican” hypocrites. This week Bannister blasted his critics for spreading “gross misconceptions” about the GOP’s ethics legislation, but then admitted that the law “Republicans” are pushing indeed “decriminalize(s) serious and intentional violations of the Ethics Act.”

But hey … that’s okay. Because Bannister says this massive, secretive decriminalization was “not (his) intent.” Not only that, he swears he’s “working with others to clearly define” the violations which would be decriminalized.

Of course Bannister makes no secret of his bias toward decriminalization. 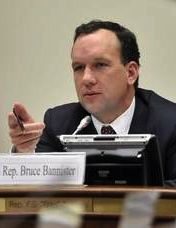 “It is not fair for a public official – nearly all of whom do campaign contributions and expenditures themselves – to be criminally penalized for simple accounting errors,” he said.

Wait … simple accounting errors? Is that what S.C. Ways and Means chairman Brian White’s scandal was about? Or the great Nikki Haley whitewash? Or S.C. House Speaker Bobby Harrell’s recent flood of scandals?

Of course not … these are corrupt public officials getting away with major violations of their oaths of office (not to mention the public trust), not “accounting errors.”

And yet Bannister is proposing to make our ethics laws governing public officials even weaker?

“Bannister’s release was astoundingly arrogant – especially since (GOP leaders) didn’t release the text of the bill to the public before an open meeting,” one Palmetto political operative told FITS. “That’s highly irregular and ironic given that this is ‘ethics.'”

Of course the most accurate statement we’ve heard throughout this debate came from S.C. Treasurer Curtis Loftis, who basically said there’s no point passing new ethics laws if lawmakers aren’t going to follow the ones already on the books.

Obviously that’s not entirely true. Lawmakers clearly need to stop policing themselves and consolidate cases under one roof (as former S.C. Rep. Kevin Ryan proposed last November).  They should also insist on total income disclosure (which former S.C. Rep. Boyd Brown included in his ethics package in January) and require that all branches of government abide by FOIA (as S.C. Rick Quinn proposed in February).

Additionally, there should be a permanent ban against lawmakers and bureaucrats becoming lobbyists – among other reforms. Oh, and a comprehensive nepotism ban.

Oh … and it’s well past time lawmakers disclose all sources of their income, as S.C. Rep. Kirkman Finlay is pushing them to do.

But in a larger sense, Loftis is right – if “Republican” leaders like White, Haley and Harrell are permitted to flagrantly break existing law without consequence, then there’s really no point to having this debate.

Which is why barring some unforeseen miracle, South Carolina will continue to be one of the most corrupt states in the nation …