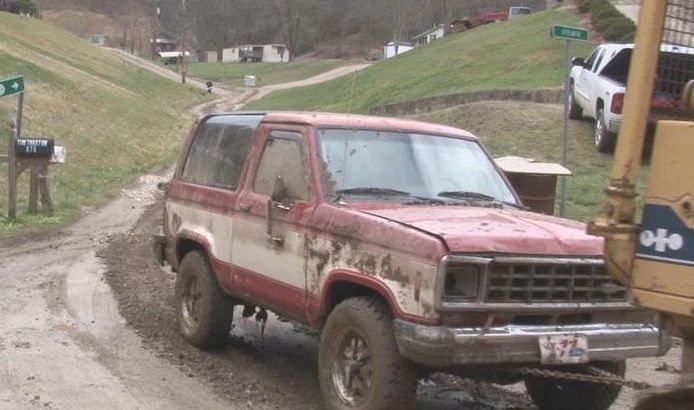 We’re not going to mourn for Shain Gandee, the star of MTV’s redneck reality TV show Buckwild. We just can’t do it. We’re sorry he died, sure, but if you were ever looking for an example of necessary herd-thinning – this is it.

Gandee and two others died near their home of Sissonville, West Virginia of carbon monoxide poisoning after the 1984 Ford Bronco in which they were traveling got stuck in the mud – its tailpipe submerged and unable to vent the toxic gases.

What a way to go, right?

Gandee, 21, was joined in death by his 48-year-old uncle, David Gandee, and their friend Robert Myers, 27.

The trio was last seen at a bar in Sissonville at 3:00 a.m. EDT on Sunday morning, at which time they informed “patrons” at the establishment of their plan to go “muddin.”

Autopsies have yet to be performed, but our guess is they didn’t choose a designated driver. In fact one of Gandee’s last tweets (posted a few hours before his disappearance) read as follows.

“We are shocked and saddened by the terrible news about Shain Gandee, and those involved in this tragic incident,” an MTV spokesperson said in a statement.

Really? Three drunk rednecks die after getting stuck in the mud and it’s a national tragedy? Okay. And while we understand the “saddened” part … is anybody really “shocked” by this?

We’re talking about West Virginia, people … a state where snake-handling preachers get killed by their venomous serpents.

Let’s chalk this “tragedy” up in that category, shall we? As well as God telling MTV to start playing music video again … you know, as opposed to a steady stream of the reality television devoted to the very worst exploits of the dregs of society.