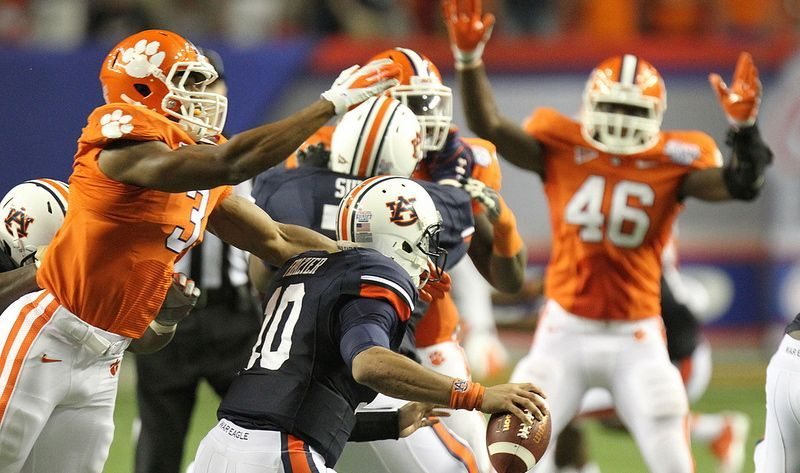 Fourteen months after being humiliated by West Virginia in the 2012 Orange Bowl, Clemson University’s football team appears to have found itself on defense. The Tigers – who coughed up 70 points to the Mountaineers – made significant progress defensively last year (especially during the second half of the season).

Clemson head coach Dabo Swinney thinks his defense is going to be even better heading into 2013.

“It’s just night and day from where we were the first scrimmage last spring,” Swinney said earlier this week.

Venables’ defense held Clemson’s All-American quarterback Tajh Boyd to a measly 5 of 15 passing for 55 yards during the Tigers’ first scrimmage of the spring. Boyd – the hero of Clemson’s win over LSU – was also intercepted once.

Clemson is led by linebacker Spencer Shuey – who recorded 93 tackles a year ago. Stephone Anthony and Quandon Christian round out the Tigers’ linebacking corps, which is poised for a breakthrough year given the depth of talent Swinney has been able to assemble.

“Really all those backers have been very, very solid,” Swinney said. “We have a really good group between Quandon, Shuey and Stephone, and Tony Steward, Kellen (Jones) and B.J. Goodson. So that’s a really good core group that we’ve got to work with.”

Clemson opens its 2013 season on August 31 at home against SEC powerhouse Georgia – the first meeting between the two teams since 2003. The former rivals have plenty of history, including a stretch of games of 1977-87 which saw both programs win national championships. Clemson and Georgia posted a 5-5-1 mark during that series – with the average victory margin standing at just 4.7 points.

Both programs are expected to enter 2013 in the Top Ten.