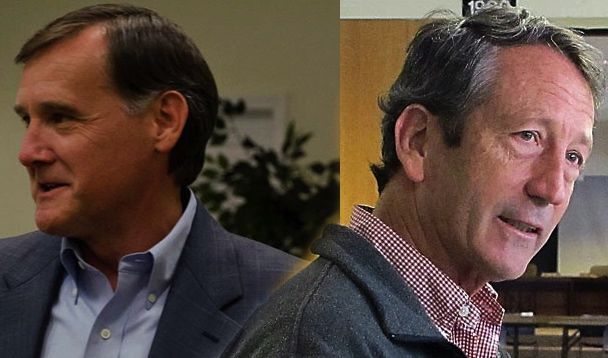 Former S.C. Gov. Mark Sanford and Curtis Bostic did battle Thursday night in Charleston, S.C. over whether it’s better to say “yes” or “no” in Washington, D.C.

Sanford argued strenuously on behalf of “no.” In fact the scandal-scarred politician quoted Barry Goldwater word-for-word in his closing statement (from memory, no less) …

I have little interest in streamlining government or in making it more efficient, for I mean to reduce its size. I do not undertake to promote welfare, for I propose to extend freedom. My aim is not to pass laws, but to repeal them. It is not to inaugurate new programs, but to cancel old ones that do violence to the Constitution, or that have failed their purpose, or that impose on the people an unwarranted financial burden. I will not attempt to discover whether legislation is “needed” before I have first determined whether it is constitutionally permissible. And if I should later be attacked for neglecting my constituents’ “interests,” I shall reply that I was informed that their main interest is liberty and that in that cause I am doing the very best I can.

The Goldwater line was an effective coda to a surprisingly effective night for Sanford, who hasn’t always been the strongest debater.

The governor was relaxed, substantive and even managed to handle “the question” about his 2009 sex scandal with a nice balance of humor and humility.

Quoting a pastor he heard the previous Sunday, Sanford said one’s mistakes “define or refine” them – and argued that a year on his family’s farm in Beaufort, S.C. after leaving the governor’s office in 2011 had “refined” him.

We’re not necessarily sure if that’s the case, but Sanford sure looked convincing.

Sanford also knew when to be brief. For example, after Bostic told the crowd he would be a “proud participant” in South Carolina’s fiscally conservative congressional delegation, Sanford answered the same question by simply saying “ditto.”

Bostic had a strong start to the debate, coming off as informed and articulate on early questions about the Port of Charleston and the issue of foreign aid. However as the debate wore on his over-reliance on talking points began to manifest itself.

For example, Bostic kept repeating the same phrase – “bringing conservatives together around conservative ideas” – as the main reason he should be elected.

Of course Bostic rarely revealed any of these “conservative ideas,” although he did offer up a handful of federal agencies and programs he wanted to eliminate – the Corporation for Public Broadcasting (CPB), the National Labor Relations Board (NLRB) and the Environmental Protection Agency (EPA), to name a few.

Sadly Bostic didn’t propose returning these funds to taxpayers – or even paying down the deficit with them. Instead, he proposed taking the money “saved” from these cuts and spending it on “more essential” items. He also refused to eliminate foreign aid funding, saying instead that America’s investment overseas should be “measured by our national security interest.”

Bostic was effective early on in the debate in branding Sanford as “Mr. No” during his time in Congress – repeatedly telling the crowd “we have to do more than just saying ‘no.'”

Of course midway through the debate Sanford received a rousing ovation when he fired back “we also need to do more than say ‘yes.'”

Bostic’s strongest point of the night came when he addressed Sanford’s vulnerability in a general election match-up against Democrat Elizabeth Colbert-Busch.

Overall, though, the night belonged to Sanford – who needed a strong performance after internal polls provided to FITS the day of the debate showed the gap between the two candidates narrowing from the 13 percent lead Sanford held over Bostic in a recent Public Policy Polling survey.