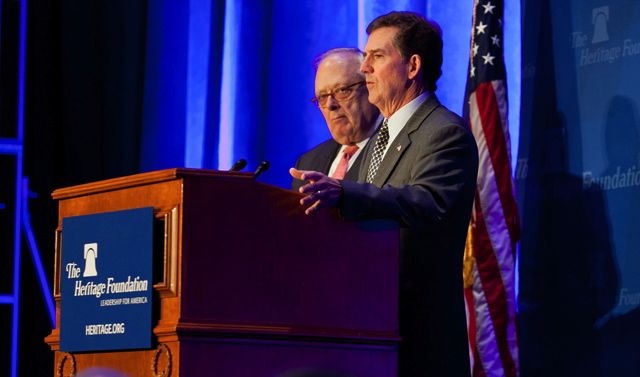 We’ve already expressed our disappointment in former U.S. Sen. Jim DeMint for leaving his elected post four years early. However we trusted DeMint when he said he could do more for the pro-taxpayer, pro-free market, pro-liberty cause in his new role as head of The Heritage Foundation, a “conservative” think tank in Washington, D.C.

So far he needs to do a lot better …

While DeMint has yet to officially take the reins at Heritage (a curious three-month delay), we were incredibly disappointed to see the organization continue to shill for our nation’s corrupt military industrial complex. Seriously … what sort of “conservative” think tank defends this shameful mismanagement? Or this shameless war-mongering?

We were also incredibly disappointed to read DeMint’s piece on gay marriage in this week’s editions of USA Today.

For a guy known for telling it like it is, DeMint’s support for the so-called “Defense of Marriage Act” is shifty and shady.

“The lawsuit before the Supreme Court on the Defense of Marriage Act … involves a woman in a lesbian relationship who was forced to pay more than $350,000 in federal estate taxes when her partner passed away because she didn’t qualify for a marital exemption,” DeMint writes. “This is why we have argued for eliminating the estate tax for more than 15 years.”

This website has consistently argued against the death tax, too, but what does that have to do with the root issue?

Everything, according to DeMint.

“The death tax is bad tax policy, period — for all Americans,” DeMint continues. “We can remove this burden without rushing to abolish marriage as the union of a man and a woman. Everyone is free to love whom they want but no one is entitled to redefine a foundational institution of civil society that has existed for centuries.”

That’s not true, though … assuming you believe in freedom of religion (we thought DeMint did) then you have to accept that individual churches have the right to define marriage as they see fit, and either marry couples (or not marry them) according to that definition.

Government should have no role whatsoever when it comes to marriage – either sanctioning it or defending it. That is exclusively the purview of the church. Government’s only role ought to be the recognition of civil unions – which as we’ve stated on numerous prior occasions are constitutionally protected from discrimination.

DeMint also misfires when he contends that committed, same sex relationships contribute to a breakdown of the family – thus adding fuel to our increasingly costly welfare conflagration.

“Gay people making the emotional and financial commitments of marriage is not the cause of family breakdown or welfare spending,” writes David Boaz of The Cato Institute. “When DeMint says that ‘family breakdown’ is causing poverty – and thus a demand for higher government spending – he knows that he’s really talking about unwed motherhood, divorce, children growing up without fathers, and the resulting high rates of welfare usage and crime. So why raise the problems of broken families and then propose to prevent gay people from getting married?”

Unfortunately DeMint’s sanctimonious social conservatism – albeit well-intentioned – blinds him from seeing the inconsistency and hypocrisy of his position. It also represents another potential chink in the credibility of the Heritage Foundation – which needs to drop its social and neo-conservatism if it expects to be a legitimate limited government voice.