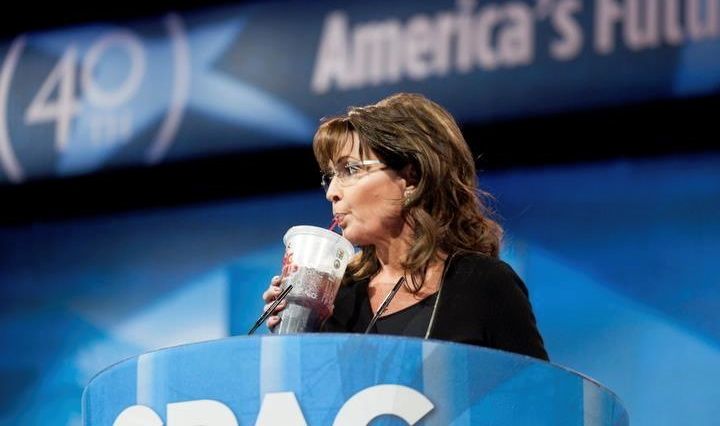 The self-styled “Mama Grizzly” lit into the leadership of her own party, most notably establishment “Republican” consultants like former White House political guru Karl Rove.

“The next election is 20 months away,” Palin said. “Now is the time to furlough the consultants, and tune out the pollsters, send the focus groups home and toss the political scripts. Because if we truly know what we believe, we don’t need professionals to tell us.”

She also had some strong words for U.S. President Barack Obama.

“Mr. President, we admit it. You won. Accept it. Now step away from the teleprompter and do your job,” Palin said.

At one point during her speech, Palin even pulled out a Big Gulp drink – mocking the ban on large sugary sodas being pushed by liberal New York mayor Michael Bloomberg.

The crowd? They went wild … repeatedly.

“Out of the park,” another said of Palin’s speech.

The “conservative” press agreed … praising Palin for her performance.

However the mainstream media – while acknowledging the rousing reception Palin received – used the occasion of her speech to discuss whether there was anything to Palin beyond the clever one-liners.

“What’s clear from Palin’s speech … is that her primary concern at this point is promoting her brand – a sort of conservative entertainer-in-chief, the person willing to stick it to Democrats and ‘tell it how it is’ to Republicans too,” wrote Obamaphile Chris Cillizza of the (Obamacare-fed) Washington Post. “What Palin seems far less interested in is laying out a vision for what the GOP should do.”

As much as we’ve dogged out Cillizza in the past (and with good reason), he is 100 percent correct in his assessment in this case. In fact we’ve been making this same basic point about Palin for several years.

“Palin’s ability to arouse fiscal conservatives (in more ways than one) is impressive – and if she’s able to craft a coherent fiscal policy and channel that base of support behind it, watch out,” we wrote more than two years ago in our initial assessment of the 2012 GOP presidential field.

Unfortunately Palin never shifted into a substantive gear – which is why instead of becoming a serious (and potentially game-changing) 2012 candidate she has become nothing but a “conservative” side show.

That’s too bad. The “conservative” movement, Palin’s “Republican” party and the country in general doesn’t need another clever quipper … no matter how attractive she may be. That’s because clever quips absent specific ideas serve no one … except Palin. What’s needed are leaders who can combine cults of personality with substantive, pro-free market policy.

Palin has never been able to do that … which is why as far as we’re concerned she will continue to be “full of sound and fury, signifying nothing.”

Ironically one of Palin’s best lines at CPAC wasn’t a critique of either party, it was a slam of the increasingly dysfunctional Washington, D.C. establishment.

“We don’t have leadership coming out of Washington. We have reality television,” she said.

Palin is right. Sadly, the same thing can be said for her, though …

This Is Budget We Waited Four Years For?