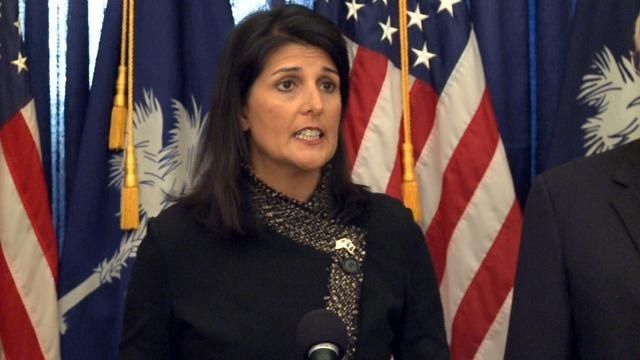 S.C. Gov. Nikki Haley gave U.S. President Barack Obama and congressional Republicans a piece of her mind this week during a trip to Washington, D.C.

After a closed door National Governors’ Association meeting at the White House, the one-time Tea Party darling ripped Obama for refusing to compromise on the sequester deal – but then slammed the GOP as well for “playing games.”

“I could not be more frustrated than I am right now,” Haley said after Obama told the governors he would not consider a sequester spending cut unless it was accompanied by tax hikes.

“My kids could go and find $83 billion out of a $4 trillion budget,” Haley added. “This is not rocket science.”

The governor then trained her fire on Republicans in Congress for skipping town and playing golf during the debate.

“There is no leadership. There is no confidence,” Haley said. “There is nothing that shows us that they actually care about what they’re doing. What they’re doing is playing games, and we as the taxpayers are having to cover for their games. We’re not going to do it anymore.”

Obviously she’s nothing but a hypocritical “reformer in name only” back here at home (as we’ve pointed on innumerable occasions), but given the opportunity on the national stage to play the partisan hack Haley didn’t discriminate in bashing Republicans and Democrats with equal verve.

As we’ve noted previously, we believe the sequester is much ado about nothing. In fact for some perspective on how ridiculous this whole debate is, read this excellent analysis by our friend Bill Wilson from Americans for Limited Government.

Still, Haley did a very smart thing by picking a fight over the sequester with members of both parties in our nation’s capital. First, she generated national ink for herself (which we all know this governor loves). More immediately relevant, though, she likely gained support among independents back at home (voters she has struggled to connect with since taking office two years ago).

Hell, she’s even got this website giving her rare props …